Focus on your message not dressing —Patience Nyarko to colleagues 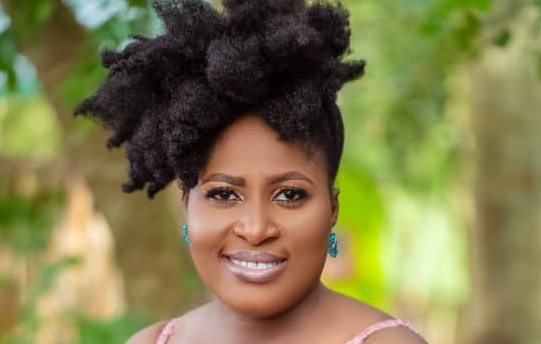 There has been concern about how some female Gospel musicians seem to pay too much attention to looking good. For some critics, the focus is now no longer on bringing people to God but being seen as fashionable and trendy.

Well, Gospel musician Patience Nyarko agrees and has asked her colleagues to focus on their messages rather than the outrageous dresses and make up.

In a recent interview with Graphic Showbiz, Patience Nyarko didn’t mince words in expressing her opinion. “As the saying goes, too much of everything is bad so if you are a Gospel musician, your dressing should not overshadow the message you are carrying across.

“If you do otherwise, it means you want to draw attention to yourself rather than the message God has given you to deliver to people. Of course, you should look good as a Christian but don’t overdo it to the extent that it will overshadow your messages,” she said.

Away from that, Gospel musicians usually have great performances, especially when they are playing with a live band, and Patience Nyarko explained why it is so.

“I believe that almost every Gospel musician started from the church, playing live music, leading praise and worship etc. so by the time they become stars, it is not a new thing for them.

“That is what helps us; every Gospel musician knows how to perform with a live band because of the church experience that we already have,” she said.

This year, the Gospel industry seemed a bit slow with the song releases not as much as in previous years and the Obi Nyanime singer said they were still recovering from the effects of COVID-19.

“Things are gradually picking up after the outbreak of the pandemic because, for the past two years, both secular and Gospel music has experienced some slow times. I trust that now that things are bouncing back, we will also come back strongly.

“That notwithstanding, I think we haven’t done badly at all, we have done quite well because imagine that you haven’t worked for two years, you would have spent all your money and you now have to look for resources to record, promote and shoot video so generally, we have done well. We hope that things will be much better next year though,” she stated.

While it seems secular musicians are scooping up all the ambassadorial deals, Patience Nyarko promised that Gospel artistes would earn more deals in the coming year.

“I believe more doors will open for those of us doing Gospel music as far as ambassadorial deals are concerned, COVID-19 slowed things down a bit in all sectors but I believe the story will be different next year God willing,” she said.

Patience Nyarko also said she had released two singles M’adansie and You Can Never Lie for Ghanaians to enjoy.

She has also opened a new studio on the Kwashieman-Odorkor road called OB Studios for musicians to hold live studio recordings.

“I would like to encourage my colleagues to come and hire the studio for all their recordings and rehearsals, it is well-equipped and they will be glad they came,” she said.