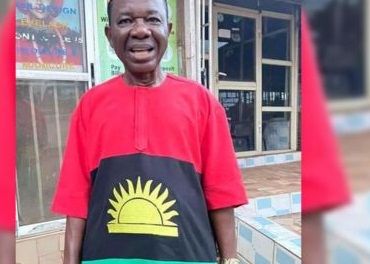 Nollywood actor, Chiwetalu Agu, has been released from Army custody a day after he was arrested for putting on an outfit with semblance to the Biafran flag.

This was made known via a video posted by Nollywood actor, Emeka Ike, on his Instagram page on Friday, where Agu was filmed with two representatives from the Actors Guild of Nigeria.

According to the video, Agu was released via the intervention of the AGN and according to one of the representatives, the actor is hale and hearty.

When asked for a comment, Agu said, “Keep supporting Nollywood. It’s the only hope we have to sustain both our public and private lives.”

The PUNCH had earlier reported that soldiers arrested the actor around Upper Iweka Bridge in Onitsha for wearing an outfit with Biafra inscriptions.

Agu was reportedly on a charity mission to the less privileged when he was arrested by soldiers.

The Nigerian Army in a statement said that the actor was arrested “while inciting members of the public and soliciting for support for the proscribed Indigenous People of Biafra”.

Fans and colleagues of the Nollywood actor were outraged as the celebrity spent his first night in the custody of the Nigerian Army following his arrest on Thursday.

Ohanaeze spokesman, Alex Ogbonnia, who spoke with The PUNCH in a telephone interview on Thursday, described the continued harassment of Igbo people by security men from other sections as condemnable and demanded his immediate release.

Olayomi Koiki, Spokesman for embattled Yoruba Nation agitator, Sunday Igboho, also condemned the arrest of the actor in a Facebook post. “When is it a crime for someone to wear a cloth made with Biafran colours?” he queried.

With his release, Nollywood stars and fans have expressed their gratitude to the AGN, for their prompt response.

Emeka Ike wrote, “Thank you Actors Guild of Nigeria for the prompt response. Thank you, Mr. President and your team. It’s nice to have Chiwetalu Agu back.”

Actress Chizzy Alichi wrote, “Uncle Chinwetalu Agu has been released. He is safe and sound. All thanks to God and everyone that contributed one way or the other.”