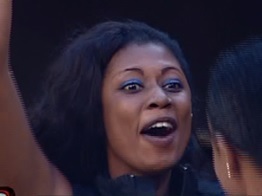 The girls continue to shine in the weekly Head of House challenges. For the third time since The Chase began, a girl was crowned sheriff of the Ruby House.

In the first week, Beverly from Nigeria won HoH. Last week, Selly from Ghana took over from the sexy lingerie model. This week, Selly beat everyone to the Head of House title again, after holding off stiff competition from a very determined Cleo.

Sulu, Bassey, Neil, ONeal, LK4 and Biguesas were all disqualified less than 30 minutes into the Task after failing to keep their arms extended over their heads, as per the Task brief. That left the competition wide open for the determined girls to claim a well-deserved victory.

After over two hours, Selly held on while her competitors fell by the wayside. When Cleowas disqualified for dodgy arm extension, Selly couldn't believe her luck. She screamed as loud as she could and hugged everyone within reach.
Cleo didn't look too disappointed at her loss though. All the Zambian could talk about was the Arena, where she will see her man, Hakeem for the first time since he was poached from the Ruby House.
Nigeria's Beverly was missing in action after she was banished from participating in the challenge, courtesy of the Power of No twist.

The Nigerian decided to soak up the sun in a corner of the garden, where she could keep her eye on her fellow Housemates.

LK4, Feza, Dillish, Hakeem and Koketso are up for possible Eviction this week. Clickhere to vote to keep your favourite Housemate in the game.

Mr. Ayariga said: “The President [John Mahama] places premium on the expeditious passage of the bill” as he is determined to run an “open government” he promised during the electioneering campaign.

“He will give his assent to it immediately the Bill is passed into law by Parliament…We would want to urge Parliament to give priority to this piece of legislation.”

The Right to Information Bill enables every person in Ghana to access information from the Government. It promotes transparency and accountability in public offices.

This allows every person in Ghana to be more proactive about the Government’s policies and conduct of civil servants as well as strengthening democracy by increasing citizen participation through empowerment.