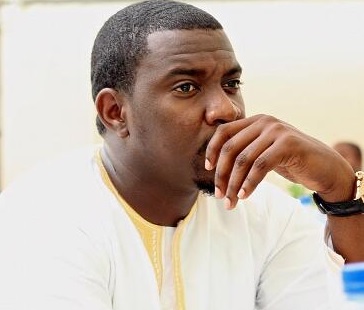 For the past two weeks since investigative journalist, Anas Aremeyaw Anas promised that he would “unclothe” star actor, John Dumelo’s dealings with an Australian lady and her baby, the ace investigator has sent many people guessing.

Anas has said in a message posted on his wall that “Somebody should be whispering into John Dumelo’s ears that whereas it is a fantastic idea to own a clothing line, it is not ideal to do that at the expense of a three month old baby and the mum. I may be forced to release some tapes on him on the saga. It is not fair to reap where you have not sown. If the matter is not put to rest in two weeks, I would release them for people to make their own judgment on the Australian issue”.

He gave a deadline of two weeks to the actor to settle the matter privately or he would come out in the open to say what Dumelo had done.

Since the news broke, all kinds of meanings and twists have been given the story and many people anticipated that the suave actor had fallen out of love with a woman and could be a victim of “love turned sour” but that seems not to be the case.

Anas would not give details but Showbiz investigations into the matter have revealed that far from being an amorous affair, Dumelo who was friends with the Australia-based Ghanaian lady was given $10,000 by the latter about three years ago to deposit in her account in Ghana.

However, Dumelo did not deposit the money and  efforts by the lady to get John to pay the money proved futile. This compelled the lady to contact Anas over a year ago to help her retrieve the amount  but again, Dumelo proved rather uncooperative.

The two weeks ultimatum that Anas gave to publicly expose elapsed last Tuesday and when Showbiz called him last Monday, he appeared rather unwilling to carry out his “promise” because as he put it “Dumelo has shown a lot of commitment on the matter,” he said.

“This is not a personal fight between John and I  as many people in the media are portraying it to be. John is a young man like me who is working hard and doing well for himself. I accorded him all the respect and gave him the opportunity to settle the matter privately for over a year but he didn’t utilise that opportunity.

“But now, he has refunded more than half of the money which indicates that he is co-operating so I am hilding my horses but I will definitely come out if he doesn’t pay the rest of the money soon”.

He said that he had been in possession of the tapes for over a year and could have released it if he had evil intentions remarking that “If what I am saying is not true, why hasn’t John come out to refute the claims? I am not interested in people’s personal lives. As Ghanaians know, my concern is in doing stories that will help us as a nation to develop, and which has impact on our lives as citizens. The only reason I took up this case is because it involved the well being of a baby and the mother”.

Anas who was tight lipped to disclose the details of the tape’s content to Showbiz however revealed that contrary to claims that the Dumelo’s case was another story of “love gone sour” the investigator said it had nothing to do with romantic relationships.

“There was never a relationship or romantic affair between them and I can confirm that because when you listen to the tapes, there was no indication of even a sexual encounter or romantic affair. Such claims are not true” he added.