SSUE is GACA 2020 Artiste of the Year 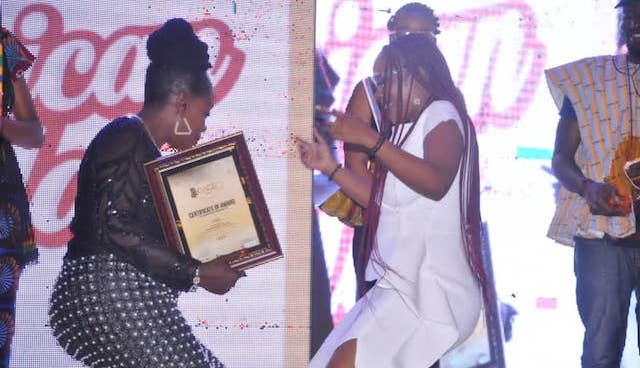 It was a night of triumph for singer/songwriter SSUE and her team when she was adjudged Ghanaian Artiste of the Year at the second edition of the Ghana Arts & Culture Awards (GACA) held on Saturday, November 14 at the La Palm Royal Beach Hotel in Accra.

SSUE beamed with pride as she stepped up to receive her award from another Ghanaian female star, Akosua Agyapong. She thanked her team, fans and all who have supported her career so far, adding “hard work pays off when you are persistent and consistent.”

She won the Discovery of the Year trophy at last year’s GACA event and came up tops in the Ghanaian Artiste of the Year category this year from a field that also comprised Wiyaala, Worlasi, Sherifa Gunu, Lamisi and Trigmatic. Criteria for placement in that category included ability to use one’s general act to promote Ghana.

Paa Kwesi Holdbrook-Smith, SSUE’s Business Manager, said the award was a recognition of the hard work she had so far put into her career and the fact that she had stuck very much to her Ghanaian and African identity.

“Though the music she plays is mostly fusion, she still remains very much within her traditions,” Holdbrook-Smith stated.

GACA was instituted in 2019 to honour individuals and brands that have made or are making major contributions to the development of Ghanaian arts and culture in the country and elsewhere.

“All those nominated in the category with me are wonderful personalities also doing their best to push Ghana as high as they can through their music.

"Though I eventually clinched the award, I think the rest also deserve praise for the good work they are doing for our dear nation,” SSUE said after receiving her award.

This year has been a busy one for SSUE. Among the projects she has tackled include opening for the internationally Steel Pulse band in Accra and an eight-week collaboration with other musicians from across the globe in a digital festival to create awareness on how to curb the spread of COVID-19.

SSUE, immediately after the awards event, put out another single, Baa Sumo Mi, from the Bambaya Fire EP. The title means ‘Come Love Me’ in Ga and she said it was a shout out to all to love her and her music.

Acting is my passion; Amankwa Ampofo