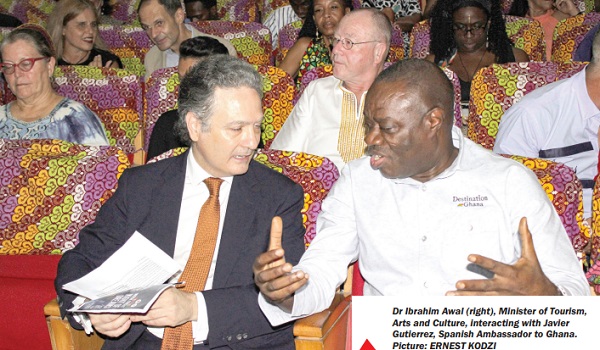 Making the country a tourism hub requires a collective effort, the Minister of Tourism, Arts and Culture, Dr Ibrahim Mohammed Awal, has said.

“Let’s sell Ghana to the world so that jobs can come, we cannot do it alone, we need everyone on board, let’s all be ambassadors of tourism,” he added.

Dr Awal was speaking at the maiden Spain-Ghana musical concert at the National Theatre in Accra.

In attendance was the Spanish Ambassador to Ghana, Javier Gutiérrez.

His entry was beautiful.

Wearing a white shirt with dark coloured trousers, the first cord he struck on the piano caught the attention of the ecstatic audience.

The enthusiasm, energy, poise with which he hit the notes and keys on the giant piano was an indication that he was built for this.

Enrique Bagaría did not leave tunes from Ghana out. He performed songs such as Down Flat, Sugarcane, originally by Afrobeat acts, Kelvyn Boy and Camidoh respectively.

Others were Kwadwofo, Tete W) Adepa and Kwaku Mensah, among others. In Nigeria, he did that of the reigning dance challenge song, Buga, by Kizz Daniel.

The concert was organised by the Embassy of Spain in collaboration with the Ministry of Tourism, Arts and Culture, and powered by Globe Productions.

Ambassador Gutiérrez commended the Tourism Ministry for its continuous effort to strengthen the relationship between Ghana and her country.

Enrique Bagaría is one of the distinguished names of the Spanish piano scene.

He obtained a Degree in Piano Studies at the Conservatorio Municipal de Barcelona and Masters at the École Normal de Musique Alfred Cortot of Paris.

Enrique Bagaría has received a number of distinctions in national and international piano competitions.