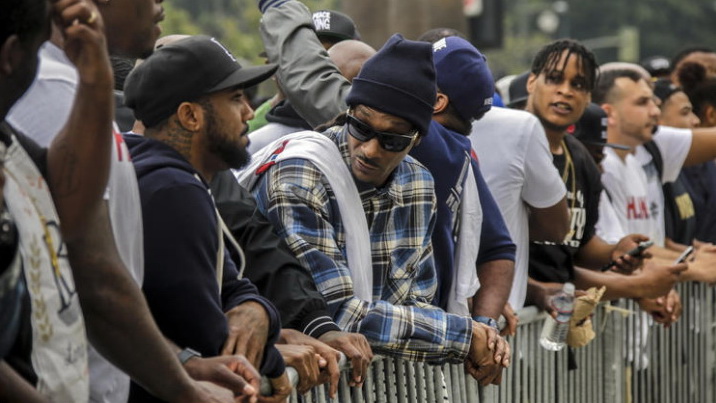 The event was held at the Church of Scientology center in the Vermont Knolls neighborhood. In the wake of the Dallas police massacre, Snoop Dogg and the Game held a joint news conference with Mayor Eric Garcetti and Los Angeles Police Chief Charlie Beck calling for peace.

This is not the first time Snoop Dogg has tried to play a mediator. In 1997, he help lead another summit to deal with violence in rap music world.

Rap star Snoop Doggy Dogg of Long Beach and rap mogul Sean "Puffy" Combs of New York came together Wednesday to call for an end to an East Coast-West Coast rivalry that has cast a shadow over hip-hop music for two years.

"The media need to let it go and the fans need to let it go," Combs said during a news conference prior to the taping of an episode of "The Steve Harvey Show," a sitcom that airs on the WB network.

Combs' Bad Boy Entertainment, whose roster includes rap star Notorious B.I.G., has traded public insults and threats with Death Row Records since one of Death Row's star artists, the late rapper Tupac Shakur, implicated Combs, B.I.G. and others in a New York ambush in which Shakur was shot by unknown assailants in 1994.

But on Wednesday, Combs dismissed the name-calling and the threats as so much hype.

"I've got nothing against Death Row Records," he said.

"That's just a part of hip-hop," he added. "It's like somebody spiking the ball in the end zone. It don't hurt nobody. It's all good."

Combs and Snoop, whose real name is Calvin Broadus, were brought together by Harvey, who suggested they call a truce after meeting separately with them on the set of "Showtime at the Apollo," a variety show he hosts.

"It's an opportunity to clear the air of an overblown controversy," Harvey said. "It's a chance to put to rest a lot of rumors, a lot of misunderstandings and a lot of misconceptions."

Combs and Notorious B.I.G. have denied that they had any connection to either shooting involving Shakur, but the feud between them and Shakur and Death Row CEO Marion "Suge" Knight escalated after the ambush in 1994.

The two camps faced off last September at the MTV Awards in New York, a few days before Shakur was fatally shot by assailants while riding in a car driven by Knight in Las Vegas. Police initially speculated that the rivalry and the shooting may have been related, although more recently they have focused on a Compton-related gang dispute that may have prompted Shakur's slaying.

Snoop Doggy Dogg has not been involved directly in the feud but said he nevertheless felt obligated to speak out and added that he was "speaking on behalf of me and Death Row Records." Knight has been jailed since October awaiting a probation violation hearing on Feb. 28, when he could be sent to prison for up to nine years.

Combs said he was "embarrassed" to be associated with "something as ignorant" as an East Coast-West Coast beef. "My intelligence level is too high for my mind to get into something like, 'I'm from the East,' or 'I'm from this' or 'I'm from that,' " said Combs, who also is a producer and recording artist. "I don't own no parts of nowhere."

Snoop and Combs will appear on "The Steve Harvey Show" on Feb. 23. In the episode, titled "I Do, I Don't," each of the rappers approaches Harvey's character, inner-city high school teacher Steve Hightower, and asks for permission to sample music from the Hi-Tops, Hightower's former group. When Hightower refuses unless they put a stop to the bad blood between them, they tell Hightower and his class that rumors of an East-West rivalry are unfounded.