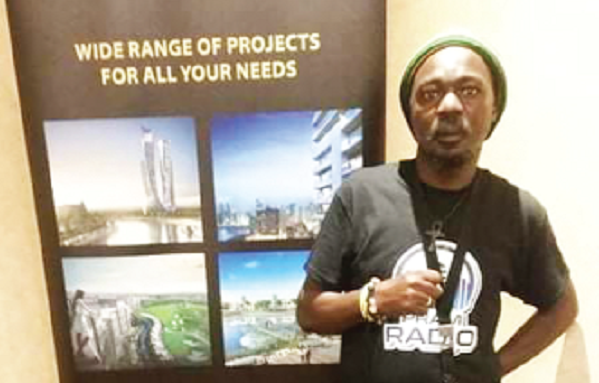 In the year 2000, King Nelson Tetteh, a fine artist established the Solar Arts Centre in Prampram in the Greater Accra Region with the objective of training young people.

It’s been two decades since he made that decision and in those years, King has trained over 20 individuals who are practising their craft across the world and he is now gearing up to start a new project aimed at using art to train the youth in Prampram to become responsible adults.

Speaking with the Daily Graphic about the new initiative, King Nelson, who is also a Global Ambassador for Pan-African Alliance, said as a native of Prampram, its development had always been dear to him and that pushed him to establish the arts studio 20 years ago.

However, the lifestyles of the youth, he says, is the reason why he has started this new project of using art for change.

“As a follower of Rastafarianism, I believe that the right things must be done, but it is unfortunate that the youth are not seeing this and that is why I have started the art for change project as an avenue to bring out the best in them,” he said.

He mentioned that even though his works had gained recognition, he had never been part of an arts exhibition since it was financially draining.

“Art really pays in the Western countries but is not really valued in our part of the world, so I have decided to only work for those who pay me. I don’t have the time for exhibition works because you don’t make anything from it,” he said.

Man of many parts

King Nelson is a man who wears many caps; he is the President and CEO of Pan African Alliance in West Africa, Brand Ambassador for Global Africa AMC and Chief Executive of J. Billionaire Productions while operating an online radio called Dram Radio.

The old student of College of Arts and Industry in Kumasi in the Ashanti Region said despite his works earning him recognition and awards, including the People Hope Award in the USA in 2017, he was not well known in Ghana.

“Unfortunately, my name is bigger than my image and that has not been too good for my works. I need a good image to help my cause in some projects I’m doing such as the Liberation Tour where I’m advocating for Africans and people of African descent to eat what they grow.

“It is an African consciousness campaign to promote healthy lifestyles. It was founded by Global Africa AMC in May last year and we intend to keep the African identity by what we eat,” he noted.