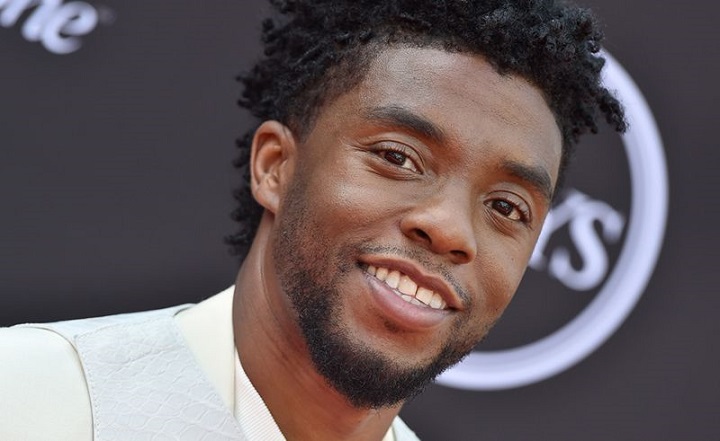 The man who first told Chadwick Boseman he would play the role of Black Panther - before Boseman even knew the film would be made - was an Australian bodyguard and comic collector, Charles Carter.

It was a story Boseman told more than once, though Carter himself has remained silent until now.

It was September 2014 when Marvel studios called Chadwick Boseman. He was in Zurich promoting Get On Up, a biopic where he played soul legend James Brown. Just the day before Boseman had decided to upgrade his phone plan to include international calls, even though he wasn't expecting one.

But suddenly his agent told him Marvel was looking to speak to him - the production house responsible for producing $100m films based on Marvel Comic characters including Spiderman and Captain America.

Such was the secrecy surrounding the project that the Marvel executive at the end of the line didn't even say the name of the iconic character they wanted Chadwick Boseman to play.

"We want you to play a role and we think you know what the role is. Are you interested?"

Boseman's driver had pulled up outside an antique shop while he took the call. Looking out of the car at the display window of the shop, Boseman saw several panther statues in a line facing him.

The offer was for him to play Black Panther, prince of Wakanda, in Captain America: Civil War and then to star in the film Black Panther itself, this time as the king of the African kingdom.

Boseman recounted this story in 2016 to a gasping audience on Jimmy Kimmel Live, during a press tour ahead of the release of Captain America: Civil War. But there was also another story that the actor wanted to share.

Looking at the audience and then at the television camera, Chadwick Boseman smiled and said, "Charles Carter, you were right. Come out wherever you are!"

Charles Carter first met Chadwick Boseman on the lot of the Fox studio in Sydney, Australia, when the actor was filming Gods of Egypt, a fantasy about ancient Egyptian deities. Carter had been employed in security for over 20 years and was working as the bodyguard of one of the film's leads.

But he instantly hit it off with the actor playing Thoth, the God of Wisdom - it was early 2014 and Chadwick Boseman, then 37, was gaining momentum as someone who could carry big Hollywood roles, like that of African American baseball legend Jackie Robinson in the film 42.

Carter and Boseman bonded over their love of martial arts, kung fu and boxing. Between takes, the two would dissect and analyse the style and technique of boxer Floyd Mayweather. The make-up artists would then reprimand Carter for play-fighting with Boseman.

"You're getting him sweaty," they'd warn.

When the two talked, Boseman mainly spoke about his family and cousins in South Carolina. It was clear to Carter that Boseman's world, and those he trusted, were a tight circle.

"He wasn't 'Hollywood'," says Carter."He was friendly and calm, but he didn't have fake familiarity with people.

"He never said it openly, but I don't think he liked people he didn't know calling him 'brother', except for me.

"When he heard people on set that he didn't know so well call him 'brother', he turned around and gave a very subtle, very calm look that said, 'Slow down, we're not this kind of close.'

"He owned himself, he was friendly to everyone, all crew on set." He also had a regal authority that made people listen to him, Carter says.

"I know the perfect role for you," Carter said to Boseman one day.

It was a story he'd known since the age of 10, when he picked up the first issue of a Black Panther comic.

As a child growing up in Sydney with a multicultural group of friends, the fact that this superhero was black didn't strike him as particularly surprising, but he was fascinated by the technologically advanced fictional African nation of Wakanda, the birthplace of King T'Challa, the Black Panther. He collected comics, sealing them in protective plastic.

When he asked Boseman if he'd heard of the Black Panther, the actor replied that while he had heard of the character, he didn't know details or storylines. The conversation ended almost as soon as it started.

But this gave Carter an idea. He went home to fetch his first edition copy of the first Black Panther comic from 1977.

What happened next would be repeated by Chadwick Boseman in media interviews two years later.

In 2016, on the American chat show Live with Kelly and Michael, Boseman said "there were weird signs" that he was going to get the role.

"Oh my God," responded the host, Kelly Ripa. "There was no sign that Marvel was even going to do a Black Panther movie or even bring the Black Panther into the Marvel universe then," Boseman continued, "but it became a thing that built in my head."

The actor would repeat the story to US presenter Jimmy Kimmel, this time turning to the camera and naming Charles Carter as the planter of the seed. Carter was in his car in Sydney when he heard the interview played back on an Australian radio station. He smiled, and recalled one of their last conversations on set.

"If they ever do a Black Panther movie, that comic book will be worth a lot," Boseman had told Carter.

"No, it's a good luck charm to stay with you forever," Carter replied. Then he added jokingly, "Just don't forget me when you're a superstar!"

After filming wrapped up in Australia, there was criticism of Boseman's character in Gods of Egypt, that it was a flattened stereotype of a magical black character.

In an interview with GQ magazine, Boseman said he agreed with the criticism, but added that he had to accept the role because "people don't make $140m movies starring black and brown people".

But the $200m Black Panther movie was already being discussed in Marvel offices. At the Black Panther launch press conference, Marvel producer Kevin Feige said that Chadwick Boseman was their one and only choice for the role.

After it was announced that Black Panther was to be filmed and Boseman publicly acknowledged him, Carter declined interviews.

"I'm obviously not responsible for Chad and Black Panther," he says. "Chad did it. It was all his merit, his skill, his beauty, his amazing talent. He did it all and I didn't want him to think I was trying to take credit just by giving him a gift."

But nine days before the world debut of Black Panther, Boseman messaged Carter.

"I know it's last minute. The tickets are hard to come by for this premiere, even for me. If you happen to be on this side of the pond on the 29th I have one for you."

As it turned out, Carter was that side of the pond, he was working in Las Vegas.

After the film screening at Dolby Theatre, Boseman invited Carter to the afterparty where Carter met Boseman's family and the cast of Black Panther.

Charles Carter and Chadwick Boseman at the premiere of Black Panther

"It was a gas," Carter says. "While there was almost everyone you could recognise from a magazine there, it was clear that Chad's attention was on his parents and family. He knew who mattered."

This was the last time Carter saw Boseman.

"At the premiere I thought he was moving a little slow and deliberate," says Carter. "I thought maybe he took a Valium as it was a big event. He was totally lucid talking to people coming up to congratulate him, but now maybe I think he may have been on meds for his cancer at the time.

"He was thinking a lot I thought."

He was smiling a lot too though, relishing the success of the film that would go on to make over $1bn in box offices worldwide, and putting a nail in the myth that black-led films were too niche to be blockbusters.

The film became a cultural touchpoint, and the first Marvel Comic Universe offering to win an Academy Award.

Boseman had been diagnosed with colon cancer two years before the film was released, but it was not something he shared, even with other members of the cast.

Carter had no idea himself, and he is reluctant to give details of the moment he heard the news or the last conversation the two of them had.

But he knows that what Chadwick Boseman did for representation is huge.

"My friend showed that it's possible to have diverse, strong and powerful leads that are box office wins," he says. "And when one person does that, it will give inspiration for many others to follow."

That said, he doesn't want to see anyone else in Boseman's role.

"No-one else can be the Black Panther now. Wakanda can live, but not King T'Challa. Writers should think of developing other leads, strong women, strong people of colour. Not replace Chadwick Boseman, because that is not possible."