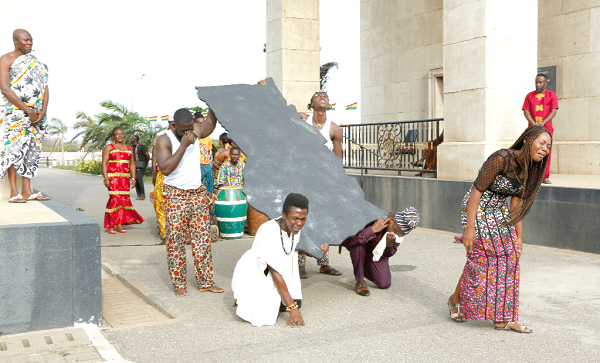 The cast of “Oman yi ye wo man” in a sketch at the event. Picture: EDNA SALVO KOTEY Follow @Graphicgh

To some, theatre arts or drama, poetry and orchestra performances are just people on stage trying hard to entertain, make people laugh or have fun and de-stress.

While that line of thought may not completely be off the mark, theatre arts mean more than drama, poetry recitals or orchestra performances — they represent the very soul of any society, a people’s culture and identity.

Drama mirrors society and is a powerful medium to point out wrongs, promote what is right, an effective tool for disseminating national policies, selling a country’s culture and educating the masses on their civic duties, among others.

Have you wondered why, of late, many national programmes or policies have not been effectively carried to the people for their buy-in?

Unfortunately for us in Ghana, the theatre arts can be said to be in comatose due to a plethora of reasons. Indeed, we have not dealt very well with our performing arts in the past, hence its current state.

Apart from the National Theatre in Accra built for us as a gift by the Chinese government, there are no purposely built theatres or amphitheatres in the country with the right acoustics to host drama, poetry, orchestra, big band music, huge concerts and even our cultural troupes.

However, the sages say it is better late than never, so even if it means starting from the scratch, we may as well start now to preserve our identity as a people and a country and maintain our uniqueness among the comity of nations.

The veteran actor, Fred Amugi, and some of his colleagues who visited the Daily Graphic last Wednesday, shared with the Editorial Conference the very sad tale of how Ghana’s theatre arts came to be where they are today — it was the result of the coup d’états which killed night life and so prevented actors and actresses from attending rehearsals and patrons from enjoying nights out watching plays at the then Arts Centre, he said.

Nonetheless, we doff our hat to playwrights such as the Artistic Director and Lead Writer at Roverman Productions, Uncle Ebo Whyte, and the Chief Executive Director of Globe Productions, Latif Abubakar, who have kept the flame of theatre arts burning, so that it does not completely get quenched.

Yesterday, at the Independence Arch, a 10-minute sketch titled: “Oman yi yε wo man”, to wit, “The nation belongs to you”, which featured a blend of old and new actors, was performed to commemorate World Theatre Day.

It was put together by Globe Productions.

The economic benefits of the theatre arts can also not be quantified. People study theatre arts at our universities and several lecturers impart knowledge and so gain employment in that sector.

Moreover, if we develop the theatre arts to the place it has to be, it can offer permanent employment to thousands of people in play writing, directing, poetry, casting, lighting, props designing, costume designing and sales, sound engineering and music and also give a boost to the catering and hospitality sector.

Above all, our culture and traditions can be preserved and also marketed, the way some of the Asian Tigers, American and European countries have done over the years.

The local film industry is also currently on its knees because the theatre arts has fallen. Most Ghanaians grew up enjoying Akan and English drama on television (the Osofo Dadzie, Obra and Daakye series, as well as Thursday Theatre).

Actors and actresses say performance in a stage play requires very hard work and is more difficult because there is no opportunity to do a second take with one’s lines.

The experience gained in stage performances also reflects in the output of the cast in films and there are many examples that attest to that, few of whom are the David Dontohs, Fred Amugis, Edinam Atatsis, Grace Omaboes and Adjetey Annans.

Above all, watching plays have a positive effect on society in that it produces a relaxed and refreshed working class, such that the entire economy becomes healthy, as people are psyched up to give of their best in their chosen vocations, while nefarious activities by idle hands are reduced to the minimum.

The celebration of World Theatre Day yesterday should spur us on to turn our attention to the theatre arts to benefit from all the gains that the arts present to the nation. We are blessed with a rich human resource in that sector, but they must be given the needed push.