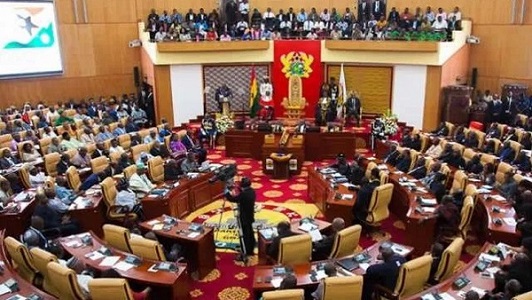 The quality of a country’s democracy hinges on strong institutions, with Parliament among those institutions.

Parliament is where the most critical issues of the state are discussed, laws enacted and supplies of money voted, with the government setting the direction and proposing policies, while answering to the public and holding the Executive to account.

To fulfil its vital role, Parliament must be respected and its members, processes and proceedings trusted. Clear norms and incorruptible values are essential to protect the dignity and standing of Parliament. The system cannot work if the locus of Parliament is called into question.

Recently, the Speaker of Parliament, Alban Sumana Kingsford Bagbin, attributed most of the challenges facing the nation to a weak Parliament.

Mr Bagbin said this when the Editor, Graphic, Kobby Asmah, paid a courtesy call on him at his office in Parliament House on Friday, July 15, 2022, with the story appearing on the front page of he Daily Graphic on Tuesday, July 19, 2022.

The Speaker said much of the waste, mismanagement and corruption that had led to economic downturns could have been averted if Parliament had been strengthened to play its oversight role effectively.

Without belabouring the point, the 1992 Constitution has given Parliament a huge oversight responsibility. It has further given it enormous powers to carry out this responsibility.

As an oversight body, Parliament helps identify problems and policy challenges that require attention and assists in overcoming bureaucratic inertia.

Parliament is crucial to the achievement of good governance in the country, being one of the key state institutions of democracy, playing an important role in terms of legislation, oversight and representation. Its representational role includes ensuring that the citizenry and other stakeholders have a voice at the national level and are, therefore, involved in national governance issues.

As an important arm of the state, Parliament has a crucial role in promoting and protecting democracy and good governance, thereby establishing not only the necessary checks and balances but also developing norms and standards for institutions of democracy and governance.

The role and functions of Parliament in promoting and protecting democracy and good governance assume a greater significance today in view of the basic principles and assumptions associated with a strong democracy.

It, therefore, becomes a matter of concern when there is the slightest indication that Parliament’s effectiveness is being undermined by certain actions or inaction of the Executive.

The Daily Graphic totally agrees with the Speaker and urges all public-spirited individuals and institutions to help Parliament become more assertive and hold the government and state institutions accountable for their stewardship to the people.

Much as we are committed to supporting the Speaker and Parliament as a whole in its quest to be assertive, we want to remind our Members of Parliament to be people of integrity at the core, to be men and women who speak and act in an upright manner, always putting duty before self and country before party.

For the Daily Graphic, it behoves all Ghanaians to work to build strong foundations and institutions to enable our dear country to operate on a more resilient basis, not dependent on a few key people pulling all the levers, pushing all the buttons and making everything work.

This requires us to uphold integrity, enforce rules and standards, apply the same rules equally to everyone andmake sure nobody is above the law.

If we can do that — consistently, persistently, unflinchingly — then we can have a shot at making things work.

When we are able to do that, then people can trust our leaders, our systems and our institutions; our democracy can mature, deepen, grow and be more resilient, as both the government and the governed will embrace and express the right norms and values.

It is essential that we steadfastly maintain our high standards, ensure that we have leaders who embody the right values, call out wrongs when they are committed, mete out punishment when due, preserve the sanctity of institutions, never taking the public trust for granted and never allowing lies, half-truths and falsehood to become the accepted norm in politics.

We must all support Parliament to be resilient and assertive to serve its purpose to the letter.