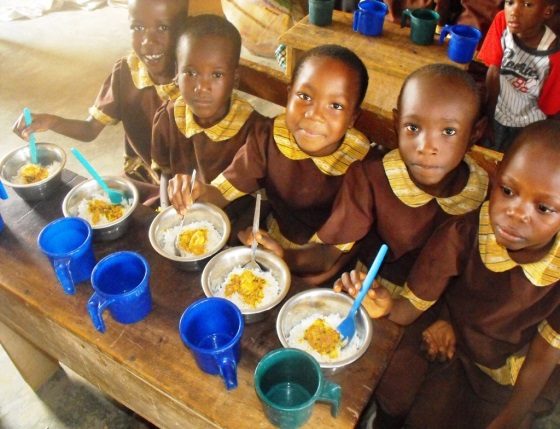 The benefits of improved nutrition to the education of children is apparent, as it has been identified as a contributory factor to the health of schoolchildren.

Good nutrition has the potential to positively influence students’ academic performance and behaviour. From existing data we know that with better nutrition, schoolchildren are better able to study, hardly absent themselves from school, while their behaviour improves, consequently leading to fewer disruptions in the classroom.

A number of studies have also established that improvement in nutrient intake has the ability to influence the intelligence levels of schoolchildren.

When the Ghana School Feeding Programme was introduced in September 2006, in collaboration with the Dutch government, the primary objective was to increase school enrolment, attendance and retention among children in kindergarten and primary school.

Aside from these, the programme was aimed at reducing hunger and malnutrition, as well as boosting domestic food production in deprived communities in the country.

As a matter of fact, a number of successes have been chalked up by the programme.

From an initial 138 schools, one in each district of the country, and covering 38,000 public primary school children, the programme currently provides lunch for more than 975 primary schools, with more than one million children receiving one hot lunch on school days.

It is worthy to note that since the school feeding programme was implemented several studies to assess its effectiveness have established that there has been an increase in primary school enrolment and attendance and the number of dropouts has decreased.

Also, children who were poorly nourished but are receiving food through the programme are showing cognitive benefits, as there has been a notable increase in their test results.

Studies have also found that local farmers who participate in the programme are having more economic gains, as they are producing more food to meet the continuous demand of the feeding programme.

It is on the basis of these achievements that every citizen must be worried by the slightest indication of a break in this laudable policy.

For several weeks, caterers on the programme stopped providing meals for beneficiary children because they had not been paid money they had expended on the programme, while at the same time complaining of the inadequacy of the feeding grant.

However, GHc50 million was reported to have been released last week to clear some of the arrears owed the caterers in seven regions for the third term of 2021.

The Daily Graphic sees this as a relief. We note the numerous benefits of the programme to the country, both now and in the future, and ask the authorities to ensure that this situation does not recur to defeat the purpose of the policy.

As we express our satisfaction that part of the arrears has been paid, we urge that we find the money, wherever it is, to pay the rest of the caterers and also increase the current grant of 97Gp per child, per meal.

It is challenging to think that we should be paying such an amount per child and expect that we will continue to achieve the objectives of the programme.

For now, we urge the caterers to manage what has been given them, while efforts must be made to increase the amount paid for each child.

We cannot allow such a good programme that has a direct correlation with our development to stall.