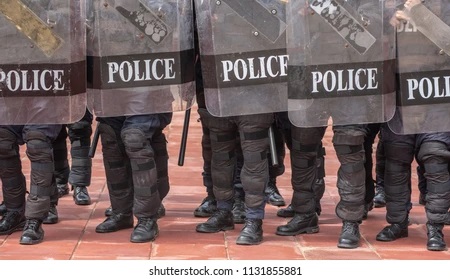 In democratic dispensations, groups or individuals who desire to demonstrate to register their concerns over issues or things they think are not right have the right to do so, but such demonstrations must be executed within the confines of the law.

In this country, we have the Public Order Act, which requires protesters to notify the police at least five days before embarking on a demonstration and also requires of the police to provide the requisite protection for the demonstrators.

In some instances, both the police and the demonstrators have often agreed on the routes to take on such protests.

It is with this in mind that the Daily Graphic is worried about the turn of events during last Tuesday’s demonstration by the pressure group,

Arise Ghana. Although the organisers and the police had agreed on the route to take and the timing of the demonstrations, the leaders of the group insisted on the time they had fixed for the demonstration, resulting in the police going to court to demand that the protesters be compelled to follow the time schedule the police demanded.

While we all expected the demonstration to be peaceful, events on the ground, which resulted in injuries to some of the protesters and policemen, could never be described as peaceful.

Whatever the disagreements were, the Daily Graphic does not think that the burning of tyres and the throwing of stones are part of the protocols governing demonstrations.

The destruction of public property, including vandalising state vehicles and disrupting members of the public from carrying on with their normal businesses are certainly not in the interest of demonstrators.

Why would demonstrators decide to use routes, contrary to the rules of engagement? What was the objective of the demonstration? How did the organisers intend to achieve those goals?

When protesters indulge in excesses or go contrary to the rules of engagement, we will certainly lose the essence of protests. The attention of the public will be turned to the violence and excesses of demonstrations, while the object of protesting against hardships will be lost.

While we acknowledge that the police have a duty of care, including protecting themselves, we believe that the Ghana Police Service must also up its riot and crowd controls to ensure that there is always peace and orderliness.

It reminds us of the handling of a protest by some students of the Islamic Senior High School in Kumasi on the frequent knockdown of pedestrians, including some of their mates, on the Abrepo Junction-Barekese road.

What should have been a peaceful demonstration turned nasty when a police deployment team fired warning shots, resulting in some of the students getting injured. Fortunately, all those who were sent to hospital have been discharged.

The Police Administration conceded that the police erred in their management of that demonstration. Being responsible for internal security by maintaining law and order, the least the citizenry expect of the police is for them to remain professional and keep to higher standards.

Indeed, the Ghana Police Service, in line with its professional standards, established the Formed Police Unit (FPU) whose major responsibility is riot control. The FPU has received global acknowledgement for its professionalism in dealing with riotous situations.

The Daily Graphic believes that the leadership of the service must constantly organise refresher courses for its personnel after they pass out from training depots throughout the country.

Just as the public need the police, so the police also need to court the public for information gathering and the exposure of criminals.

The Daily Graphic believes that the Police Intelligence Unit must also up its game to pick up signals about demonstrations and recommend appropriate measures to deal with troubles that may come up.

The police should not be seen to be intimidating the public through the unnecessary use of firearms, tear gas, etc. The use of persuasive skills can, in most cases, resolve problems better than the use of force.

We are happy to observe that the second day of Arise Ghana protest ended peacefully yesterday and the protesters were able to present their petitions with the police efficiently managing the exercise. That is the way to go.

While we do not want a repeat of such riotous incident, we urge caution to all who desire to embark on demonstrations, in full compliance with the Public Order Act.

We believe that the police must distinguish clearly how they control riot and crowd in the discharge of their duties.