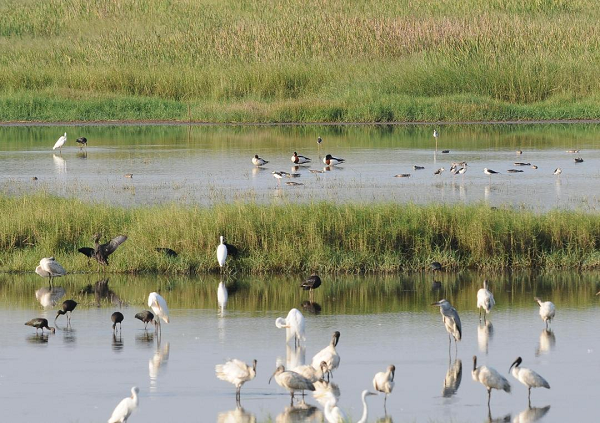 A couple of days ago, a number of walls and some structures that had been developed up to the lintel level at the Ramsar site at Klagon in the Tema West Municipality in the Greater Accra Region were pulled down.

The exercise, which officials claimed was aimed at protecting the remaining land space within the Ramsar site, was carried out by the Greater Accra Regional Coordinating Council.

But the enthusiasm was short-lived and the usual disappointments characterising such exercises set in. Contrary to earlier reports that all buildings identified to be on the encroached land were going to be demolished, no completed property was touched.

It is worthy of note that as recently as in the 1980s, lagoons such as the Kpeshie, Korle and Chemu all in the Greater Accra Region were babbling with aquatic life and activity.

But uncontrolled encroachment and development have unfortunately led to the extinction of these resources. In their current state, the Chemu and Korle lagoons no longer support aquatic life because of serious pollution over the years.

The Kpeshie Lagoon has also received its fair share of destruction and is now a pale shadow of itself. Large portions have been recovered and sold to private and commercial developers. The hitherto active water body is now occupied by residential and business structures.


Extensive portions of the lagoon have been filled with sand, construction debris and garbage.

As a people we seem not to have any limit in our unrestrained character to plunder every available resource damned the repercussions for the future of the environment.

At the Ramsar site, our greed has led us to the destruction of another vital resource – the Sakumo Lagoon, which is meant for protecting Sakumono, Tema and their environs against floods.

Curiously, the Sakumo Lagoon is not just any wetland. It is a wetland whose existence has been identified to benefit not only Ghana but the wider international community.

The site was labelled a Ramsar designation in 1992 and by that designation, it provides for a national action and international cooperation to protect it. It is the only wetland wholly owned by the government, but strangely successive governments with all the resources at their disposal have not been able to stop developments around this important resource.

Experts have expressed concerns that the Sakumo Lagoon will join others which have gone extinct in view of the impact of human activities in and around the lagoon.

The Daily Graphic thinks it will be unfortunate for the Sakumo Lagoon to go the way of the once vibrant Kpeshie, Chemu and Korle lagoons.

What an embarrassment it will be for all of us, that as a country we could not protect our own Ramsar site from abuse — a site internationally recognised as collecting and storing water from nearby sources to prevent flooding.

Just recently, Weija and its surrounding areas were flooded when the Weija Dam was spilled. The flooding was attributed to building on the watercourse. As usual we shouted and cried at the top of our voices and even cursed those who have built on the watercourse. The clarion call was that all unauthorised structures must be demolished without delay.

But alas, we forget so easily. We have gone to sleep while Tema and its surrounding areas are brewing with flood disasters, as very soon there won’t be any site to collect the excess water from the rains.

We mustn’t look on unconcerned any further. Until we crack the whip the hardest, a few recalcitrant, selfish individuals will continue to make life difficult for everybody while it lies in our hands to deal with and prevent the problem.

The greed, resulting in the total disregard for environmental laws, coupled with the loud silence of authorities that have been mandated, in many cases with the allocation of huge resources to execute their mandate, must end.

The Regional Minister has halted the exercise with the claim that the few walls demolished constituted the first phase of clearing structures on the Ramsar site.
We wait to see when the next phase will take place.