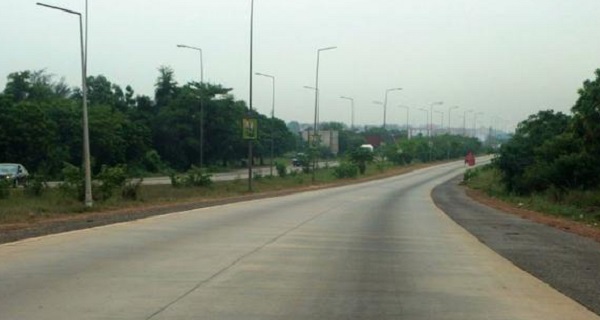 It has been 56 years since the construction of the 19-kilometre Accra-Tema Motorway.

The concrete motorway was opened to traffic in November 1965 to link the Harbour City of Tema to Accra, and was supposed to be the first in motorway systems to be replicated to link major towns and cities in the country.

Despite this laudable intention, the motorway remains the only one in the country to date, serving local commuters and transit trucks transporting goods from the Tema Port to countries such as Burkina Faso and Mali.

Due to the growing pressure on this concrete road, as a result of population growth and the increased number of vehicles plying it, deep potholes, some of which have been patched with bitumen, and erosion have left the motorway in a dangerous state, with the daily deterioration posing danger and discomfort to drivers and others who commute on it on a daily basis.

Aside from the deteriorated state of the motorway, visibility on the long stretch is poor at night, as a greater number of the street lights mounted on it about a year ago are not functioning.

Other long-standing disturbing features of the motorway are the acts of indiscipline, in the form of road diversions, illegal U-turns, illegal bus stops, dumping of refuse, farming, dangerous driving, among others, mainly perpetrated by drivers, slum dwellers, tricycle riders and farmers.


The ills associated with these illegal activities include pedestrian knockdowns and car crashes.

We at the Daily Graphic are alarmed by the number of road accidents that occur on the motorway as a result of its poor state, and concur with engineers of the Ghana Highway Authority (GHA) that the motorway has outlived the purpose for which it was constructed in 1964 and must be reconstructed with urgency.

When the motorway was constructed in the administration of Kwame Nkrumah, our country’s first President, there weren't people living along it and it was not meant to serve such huge traffic. But now that road needs to be redesigned to check some of these indisciplined acts.

Since December 2020, the Daily Graphic has focused on safety on the motorway and produced six stories to highlight some of the acts of indiscipline that portend danger for road users, as well as the bad state of the road.

The first story: "Motorway menace on increase", focused on some of the illegal activities perpetrated by both motorists and squatters along the motorway.

That was followed in January this year by another story: "Indiscipline unabated: Accra-Tema Motorway without rules", which also threw light on the indiscipline on the motorway that was threatening the safety of road users.

“The lights go dim; Accra-Tema Motorway in focus” was published on April 15, 2021 to highlight concerns of motorists over visibility on the road and how challenging it was to drive on it at night.

After the publication, the Director General of the Ghana Standards Authority, Professor Alex Dodoo, told the Daily Graphic that the street lights did not conform to the country’s standard for street lighting.

That revelation was then captured in a follow-up story with the headline: “Motorway lights substandard — GSA”, which was published on April 16, 2021.

Our attention then shifted to the state of the motorway with a story published on June 1, 2022 with the headline: “A year on: Accra-Tema Motorway Still In Bad Shape”.

Last year, after some of those stories had been published, the Minister of Roads and Highways, Kwasi Amoako-Attah, told the Daily Graphic in an interview that plans were far advanced for the reconstruction of the motorway to make it safer for users and gave an assurance that the government was in the process of reconstructing the road soon to ensure the safety of road users.

Despite the assurance by the minister, the motorway has since not seen any major rehabilitation. Rather, motorists are still confronted with the nightmare of a deteriorating road, prompting calls for the government to fix and restore it to its original state.

The Daily Graphic believes that the government holds the key to the reconstruction of the motorway due to the huge financial commitment involved in such high-ticket infrastructural projects.

But we are optimistic that that road can pay for its reconstruction when it's properly tolled and the revenue well managed by those who are put in positions to manage it.

We, therefore, urge the government, through the Ministry of Roads and Highways, to make good its promise to reconstruct the motorway to make it safe for all users.