Post-election violence, police must be decisive 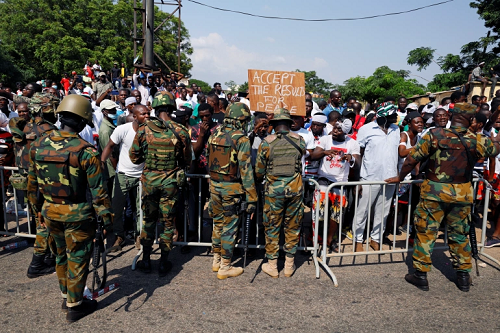 Prior to the December 7, 2020 polls, the National Election Security Task Force assured the nation of the preparedness of the security agencies to police the polls in a professional and ethical manner. The police had also assured the nation that they would deal with any acts of violence or troublemakers even after the elections.

Indeed, but for the 21 incidents which resulted in the death of six persons, the elections were generally peaceful.

Since the end of the polls, the police have acted swiftly and professionally to deal with some incidents of violence and other abuses against other citizens.

The arrest of the District Chief Executive of Ajumako, Ransford Kwesi Nyarko; the prosecution of national security operative, Collins Quarcoo, for shooting people at the Ablekuma Central Constituency and the arrest of 26 people for unlawful demonstration are but a few examples that can be mentioned.

It is heartening to also hear that the police are pursuing all other suspects involved in election-related violence during the 2020 presidential and parliamentary elections.

The Daily Graphic believes that the arrest of such persons, including that of the military officer whose stray bullet hit two persons in the Ablekuma Central Constituency, the Savelugu incident in which gunmen fired into jubilant supporters of the National Democratic Congress (NDC) and the firing of guns in the Techiman South Constituency, will help bring sanity into our post-electoral processes.

It is time the electorate and our politicians appreciated that in a democracy, the rule of the thumb is heavier than that of the gun.

We are, therefore, urging the leadership of the Ghana Police Service to rally behind their personnel to enforce the law.

These cases should not be swept under the carpet, but handled to their logical conclusion.

At least, the police have taken the step to arrest and prosecute. If the law courts set the suspects free, we will know that the police did their part.

The police must be decisive in dealing with miscreants without fear or favour. Personnel must stay focused on their investigations and bring every case to an end.

We believe that the action of the police should motivate other state institutions to independently perform their work without worrying about being tagged as anti-government.

The Daily Graphic thinks that Ghana has come far in its democratic journey and it is high time our institutions lived up to expectation as strong institutions that discharge their functions without any political colouration.

In an address to Parliament during his first visit to sub-Saharan Africa, a former United States of America President, Mr Barack Obama, drummed home a poignant message that “Africa does not need strong men; it needs strong institutions”.

We will always agree with him because capable and transparent institutions are key to the success of any country.

This is why we urge all stakeholders, including the media, the legislature, the judiciary and civil society organisations to live up to their responsibilities to make sure that our democracy thrives and let the citizenry feel its essence in their lives.