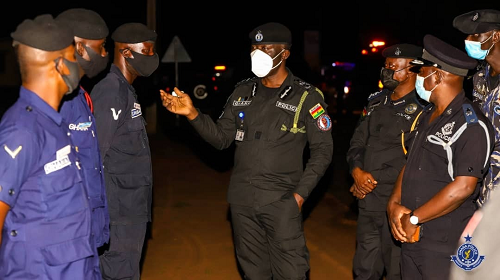 A person who has ever been a victim of crime or even witnessed one never forgets the experience, because the trauma associated with it alone is something that leaves a scar on the victim and the witnesses.

Consequently, many have always desired that there is security presence in their neighbourhoods on whom residents or businesses can easily call for help. But many a time, before help comes, the criminals would have left, leaving in their wake loss of property and its attendant psychological trauma.

It is in this vein that the Daily Graphic welcomes the creation of a new police administrative region, the Central East Regional Police Command, the first since 1966, as part of efforts to ensure effective and efficient policing in the country.

We believe that the creation of the new police region will bring policing services closer to the communities in that part of the Central Region where criminal activities, particularly land guardism and indiscipline on the roads, are rampant.

Fortunately, the government has given clearance for the recruitment of more personnel into the Ghana Police Service and other security agencies.

The Daily Graphic, therefore, expects that the new regional police command will put in place effective measures to reduce crime and bring sanity to the area. Indeed, there are many home owners in the area who have abandoned their houses as a result of the activities of criminals.

The effectiveness of the new regional police command will boost public confidence, as well as promote peace and security in the area. It will also justify the decision of the Police Administration to create the new region.

The Daily Graphic reminds the officers at the new command, led by the Regional Commander, Deputy Commissioner of Police (DCOP) Mr Kwadwo Otchere Boapeah, that the acting Inspector-General of Police, Dr George Akuffo Dampare, has his eye on the ball. He has been going on patrols himself and visiting communities, as well as police stations, to ascertain things for himself.

It is also a charge to all schedule officers and other regional commanders to join the bus or be left behind. In fact, we believe that the leadership of the Ghana Police Service must give each officer in command position, including schedule officers, key performance indicators (KPIs) to be assessed and gauge progress to help the Police Administration, and for that matter the government, know the progress of work.

We commend the Police Administration for this new initiative of creating a region to bring the total number of police regions to 18, although we have 16 administrative regions.

The Daily Graphic, however, urges the administration to do more than the creation of regions by endeavouring to instill discipline among the personnel as well.

The complaint that policemen give out the names of informants needs to be addressed if the police are to win the fight against crime and the confidence of the people.

The Police Administration must also task its investigative wing, the Criminal Investigations Department (CID), to be up and doing and bring finality to cases lodged with the department. The CID’s failure to complete investigations into cases has often let many people lose confidence in the police.

We wish to also remind the public that fighting crime is a shared responsibility and so we must not abandon our roles. When things are going wrong or we see suspicious persons in our communities, we must alert the police.

Fortunately, the Police Administration has assured the public of its availability to address the challenges of crime and we must avail ourselves to support its personnel.