Govt, labour must use May Day to patch up differences 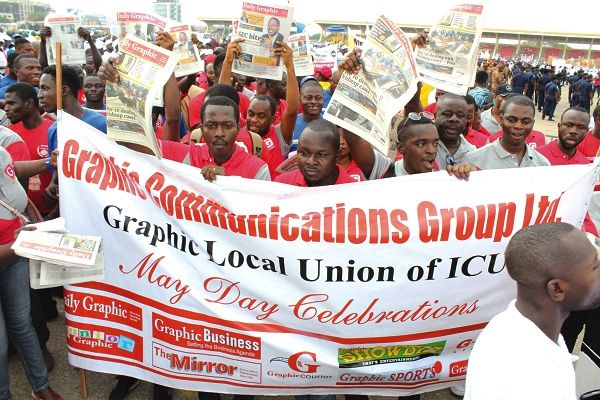 Tomorrow is May Day and labour will join hands with their counterparts across the globe to observe the day with a series of activities around the country.

Also known as Workers Day or International Workers Day, it is a day commemorating the historic struggles and gains made by workers and labour movements.

Over the years, the labour force in Ghana has used the occasion to drum home its grievances and urged government to reconsider mainly, its conditions of service and remuneration in view of the sacrifices its members make to get the wheels of the economy running effectively and efficiently.

This year’s celebration will be no different. In fact, it will even serve as a ground for the various unions to vent their frustrations on what they see as the challenges within the system and the fact that their salaries are not able to carry them home.

The celebrations tomorrow comes at a time when there had been a lot of agitations towards the end of last year through the beginning of this year to date.

Much as there were some disruptions in the economy as a result of the COVID-19 pandemic, the recovery has been faster than anticipated and the latest numbers released by the Ghana Statistical Service and the Ministry of Finance bear testimony to that fact.

This points to the fact that the economy is still resilient although there is some more work to be done to translate the macroeconomic achievements into micro where jobs will be created.

The Daily Graphic joins the government and all well-meaning Ghanaians to celebrate May Day tomorrow with labour and congratulates all workers on their hard work and steadfastness in the face of all the myriad of challenges that have bedeviled our dear country through the pandemic era and at this time when the Russia invasion of Ukraine has turned the progress of the world towards the opposite direction.

While at it, we are also not oblivious of the seeming tension between the government, as an employer, and labour in the last few months over issues of conditions of service.

We are also aware that some of the issues, most of which border on remuneration, remain unresolved, a situation which has forced some labour unions to strike, leaving government services shut.

Much as we agree to the terms, as demanded by labour, we wish to draw the attention of the leaders of the unions that we are not in normal times and the country’s finances is not in the best of shape, in spite of the macroeconomic progress made so far.

The private sector, which is the engine of growth, seriously needs labour within the public sector to thrive and, therefore, any strike action results in the government losing billions of Ghana cedis, some of which could be used to settle the monthly salaries and other benefits of workers.

On the other hand, we also prevail on the government to seriously follow through its pledge to drastically cut down expenditure and resist the temptation of showcasing themselves in public as though all is well with the economy.

We believe that the best way to convince labour to hold on to the demands being made because of the present conditions is for the government itself to show the way by first tightening its belt before asking labour to do same.

Times are hard but we are convinced beyond reasonable doubt that the situation in not hopeless.

If it takes two to tango, we trust the two parties, government and labour, must sit to jaw jaw to find a lasting solution to amicably resolve any impasse between them. This is necessary to prevent a halt in economic progress.

Truly, history has a lot to teach us about the roots of government - labour harmony and tomorrow’s celebrations must remind us all of the sacrifices labour makes.