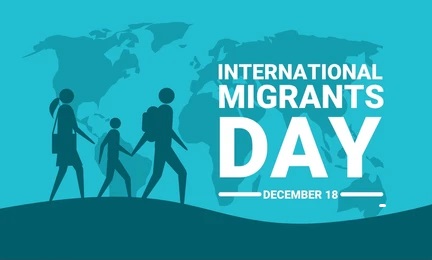 This year’s International Migrants Day was commemorated shortly after the first-ever world report on the health of refugees and migrants was launched, shedding light and key evidence on the multitude of health challenges faced by migrants and refugees along their journeys.

The UN migration agency, the International Organisation for Migration (IOM), defines a migrant as any person who is moving or has moved across an international border or within a state away from his/her habitual place of residence, regardless of: (1) the person’s legal status, (2) whether the movement is voluntary or involuntary, (3) what the causes for the movement are, or (4) what the length of the stay is.

On December 18, every year, the world marks International Migrants Day, a day set aside to recognise the important contribution of migrants, while highlighting the challenges they face.

This year, the focus is on ensuring good health for migrants and the commemoration was on the theme: “Ensuring access to health care, no matter where you come from”.

Current statistics indicate that about one in every eight people on the globe is a migrant or is moving, and this is likely to grow due to conflicts, persecutions, environmental degradation and climate change.

People also move because of a lack of human security and opportunities, and over 59 million were internally displaced by the end of 2021.

The experience of migration is a key determinant of health and well-being and certain groups of migrants, such as low-skilled migrant workers, remain among some of the most vulnerable members of society, especially where living and working conditions are not conducive to good health.

They have limited access to essential services, including health care, and are faced with xenophobic attacks and stigma fueled by misinformation. In addition, many migrant workers are often in temporary, informal or unprotected jobs, a situation which exposes them to a greater risk of insecurity, layoffs and poor working conditions.

However, due to the persistent lack of safe and regular migration pathways, millions continue to take perilous journeys each year, and since 2014, more than 50,000 migrants have lost their lives on migratory routes across the world.

Despite this, migrants have proved to be a source of prosperity, innovation and sustainable development for countries of origin and transit and in host countries. Their financial contribution, through remittances, offers a lifeline to families and spurs local markets, especially those of low- and middle-income countries.

It is due to these reasons and more that the IOM has reaffirmed its commitment to promote humane and orderly management of migration for the benefit of all, including the communities of origin, transit and destination.

Since the earliest times, humanity has been on the move. Some people move in search of work or economic opportunities, to join families or study. Others move to escape conflict, persecution, terrorism or human rights violations.

Today, more people than ever before live in countries other than those in which they were born. According to the IOM World Migration Report 2020, as of June 2019, the number of international migrants was estimated to be almost 272 million globally, 51 million more than in 2010.

While many individuals migrate out of choice, many others migrate out of necessity. According to the UNHCR, the number of globally forcibly displaced people worldwide was 79.5 million at the end of 2019.

There were also an estimated 38 million migrant children, and three out of four international migrants were of working age, meaning between 20 and 64 years, and 164 million were migrant workers.

All these statistics show that the healthcare needs of migrants must be of paramount importance to the countries in which they find themselves.
Health care should also be treated as a basic human right and people who find themselves in other countries other than their countries of birth or origin due to any of the factors cited earlier must be accorded the best of health, especially when they fall ill.

It must be made a crime to treat sick migrants or those in need of health care as mere criminals, even when they are illegal migrants, because they are first humans.

The Daily Graphic urges the government and other countries belonging to the comity of nations to forcefully push this agenda and any country which abuses this right must be sanctioned.