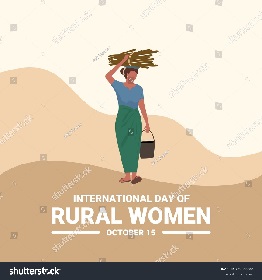 Rural women account for a substantial proportion of the agricultural labour force in Ghana, as well as informal work, and perform the bulk of unpaid care and domestic work in families and households.

Even so, women and girls in rural Ghana suffer disproportionately from multi-dimensional poverty. While extreme poverty has declined globally, the world’s one billion people who continue to live in unacceptable conditions of poverty are heavily concentrated in rural areas, including Ghana.

Women and girls in rural areas lack equal access to productive resources and assets, public services, such as education and health care, and infrastructure, including water and sanitation, while much of their labour remains invisible and unpaid for, even as their workloads become increasingly heavy due to the out-migration of men.

All these issues provided the basis for instituting the International Day of Rural Women in 1995 by civil society organisations at the Fourth World Conference on Women in Beijing, which was declared by the UN General Assembly as an official United Nations Day in 2007.

The objectives of the day are to mobilise relevant non-governmental organisations and grass-roots women’s groups, organisations, networks and international institutions, as well as the media, to commemorate the day and celebrate rural women leaders and their communities around the world.


The day is also to raise awareness of rural women’s participation in the development process, with a focus on their needs and rights, highlighting their contributions to sustainable development, household food security, safeguarding traditional knowledge, biodiversity, peace-building and so much more.

It is also to sensitise the public at large and lobby governments concerning the crucial role rural women play in climate change management and to prioritise action for their support.

The theme for this year’s commemoration is: “Rural Women Cultivating Good Food for All”, which highlights the essential role that rural women and girls play in the food systems of the world.

According to the UN Women-Africa, from the production of crops to processing, preparing and distributing food, women’s labour, paid and unpaid, fed their families, communities and the world. Yet women do not wield equal power with men, and as a result, they earn less income and experience higher food insecurity.

The Daily Graphic holds the view that empowering women is not only the right thing to do but also a critical ingredient in the fight against extreme poverty, hunger and malnutrition.

The report says giving women the same opportunities as men can increase agricultural production by 2.5 to four per cent in the poorest regions and the number of malnourished people can be reduced by 12 to 17 per cent. Yet women face significant discrimination when it comes to land and livestock ownership, equal pay, participation in decision-making entities and access to resources, credit and market.

The Daily Graphic believes that the commemoration of the day gives the government the opportunity to celebrate women and girls who play a key role in the rural areas by enhancing agricultural development, building climate resilience, facing malnutrition and food insecurity.

Despite being too often excluded from decisions that affect their daily lives and limited by unequal resource allocation, rural women are fundamental, both within and outside their households.

The paper also believes that it is time to reinforce women’s leadership at all levels; that is, from the farm to farmers’ associations to global farmers’ forums, as it is time to foster rural women’s participation and leadership in farmer and producer organisations and other decision-making bodies.

The government and stakeholders should also reinforce rural women’s self-confidence, knowledge and skills, including technical, leadership and managerial, through gender-sensitive extension and business advisory services, vocational training, functional literacy and the adoption of appropriate learning approaches.

The Daily Graphic is certain that poverty reduction, sustainable development and food and nutrition security are not possible without the full and optimal engagement of rural women, including young generations of girls who can lead the transformation and be agents of change in all aspects of their daily lives.