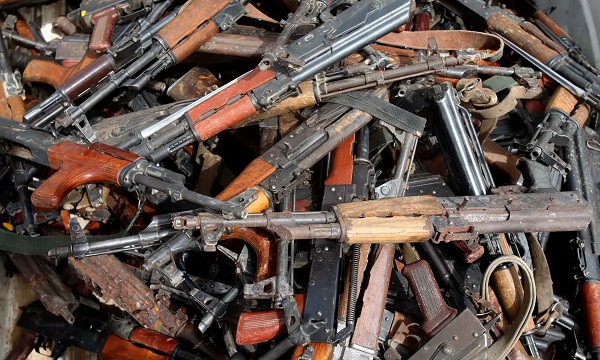 The proliferation of small arms and light weapons in the country is worrying, more especially when these arms and weapons find their way into the hands of the youth.

Apart from the threat of facilitating criminal and armed violence, the situation could also disrupt economic activities, social services and cohesion, while affecting the practice of the rule of law through the use of private security.

It could also contribute to the growth of terrorism, organised crime, human trafficking, among other ills in society, and consequently affect the overall development of the country.

According to the National Commission on Small Arms and Light Weapons, there are over three million unauthorised weapons in the hands of civilians in the country, a situation which poses a serious threat to national security.

Indeed, it is estimated that one billion small arms are in circulation worldwide among terrorists, violent extremists, organised criminals and warring gangs, a threat to world peace and security.

It is for these reasons that we at the Daily Graphic applaud the call by the Overlord of Dagbon, Ya-Na Abukari II, to all paramount chiefs in Dagbon in the Northern Region to ensure that their people stop the display and use of firearms and live ammunition during the performance of traditional events in their respective jurisdictions.


The Ya-Na reminded the people that such practice was unlawful; that the Dagbon Kingdom was not at war and urged the chiefs, as members of the Dagbon Traditional Council, to, as a matter of urgency, implement the directive within their respective traditional areas without delay.

The Ya-Na gave the directive at an emergency meeting of the council in Tamale, at which the matter was discussed among other issues.

The meeting brought together members of the council, who deliberated on the proliferation of illicit small arms and measures to stem the tide.

The use of firearms during traditional activities, such as funerals, festivals and other social gatherings, had become a worrying phenomenon in that part of the country.

There had been instances when a section of the youth, in brazen impunity, had carried sophisticated weapons and live ammunition at funerals, especially during the installation of regents and the circumambulation of palaces.

It is, therefore, important that the youth take the Overlord’s advice seriously by eschewing acts of violence and rather work towards promoting the rich and time-honoured culture and traditions of the area.

The bottom line, however, is that there are no job opportunities in the area and so it is easy to mobilise the idle youth to engage in any activity that will help them butter their bread.

In this light, the Daily Graphic adds its voice by entreating the youth to exercise restraint in such situations, while urging the government to expedite action in creating the enabling environment that will encourage the private sector to set up businesses in the area.

Apart from establishing factories for the processing of food items, other interventions, such as the supply of equipment, including modern tools for farming, improved seeds and credit facilities, could be made available to the people to go into farming, which is their mainstay.

These could be integrated into the government’s Planting for Food and Jobs initiative to encourage more people to take to farming, as was the case during the Operation Feed Yourself era in the 1970s.

Religious and youth leaders also have roles to play by advising the youth, in their sermons, to abstain from wielding small arms and light weapons at events.

The people must be made to understand that the possession and use of such weapons of destruction create panic and fear among the citizenry, including potential investors, and also that without peace, there will not be development.

The time to act is now!