Child labour canker must be addressed 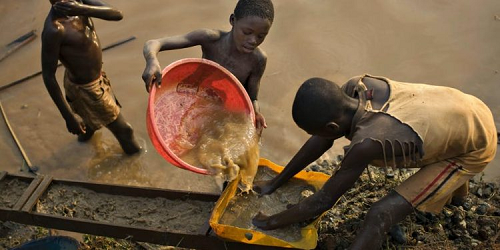 Last Saturday, we published a disheartening story which said more than three million children were reportedly engaged in child labour.

Again, the report indicated that it was estimated that more than one out of every five children in Ghana (21.8 per cent) were involved in child labour.

Over the years, we have always found one reason or another, including cultural and traditional practices, to justify the issue of children engaged in one form of labour or another.

But, certainly, any such form of labour is a clear violation of the children’s constitutional rights and a critical leakage to accelerated national development.

Due to economic hardships or lack of hands to support the home, we often find reasons to send our children to farms, the riverside and the streets to hawk or even engage in child prostitution, instead of going to school. Due to irresponsible parenting, some children are also forced to engage themselves in these negative trades to keep body and soul together.

Sadly, our Department of Children and Welfare units are unable to help because of logistical constraints.

It is not the case that Ghana does not have the laws or the legal framework to protect children against child labour; its enforcement is the headache.

For instance, even though Section 96 of the Children’s Act, 1998 (Act 560) mandates metropolitan, municipal and district assemblies (MMDAs) to enforce the laws on child labour, we wonder which of our MMDAs are able to enforce it. Again, although Section 88 of the Children’s Act, 1998 (Act 560) prohibits night work and long hours of work for children, many children are caught in that web.

Indeed, it is the norm in some parts of the country for schoolchildren to be used as farm hands by teachers and also undertake household chores for them.

When we expose our children to these hazards, the consequences are always grave, not only for the families but also the country as a whole.

For instance, the just ended Basic Education Certificate Examination (BECE) in the Wenchi municipality saw 14 pregnant candidates and 11 nursing mothers taking part. In the event that these unfortunate teenagers do not get the requisite support after delivery, it means their children will also be exposed to such hazards.

This is where the Daily Graphic would want to encourage all stakeholders, including non-governmental organisations, to come on board to support and put our children at their rightful place to help reduce the poverty gap.

In the past, there were some NGOs and civil society organisations which had undertaken projects to support the education and vocational training of children in the cities and villages as a way of empowering them to be gainfully employed.

We believe that it is time we sat down as a country to review all the legal frameworks, identify the challenges in their implementation and come up with appropriate solutions to address the canker of child labour.

Fighting child labour issues should not be left with any one ministry or agency; we must all play a key role in addressing the problem. For instance, how come our MMDAs have never thought of it or come up with a programme or solution to address child labour issues in their respective jurisdictions?

We cannot and should not expect the central government to address the child labour menace alone when the MMDAs are on the ground to effectively deal with it.

The media will continue to bring these development challenges to the fore and we expect our duty bearers not to sweep the issues under the carpet.

The time to act is now before it is too late. We need to build our human capital for the effective management of our resources and also position our country to reap the dividends.

We will be losing the agenda if we allow so many of our children to engage in child labour activities, instead of educating to take over from where we will leave off.­