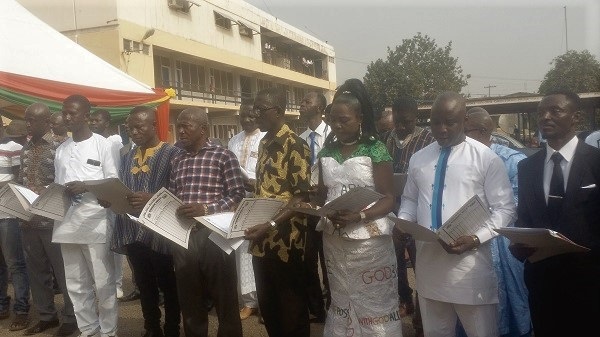 A new tenure of metropolitan, municipal and district assemblies (MMDAs) has commenced with the inauguration of the assemblies by President Nana Addo Dankwa Akufo-Addo last week.

In all, 6,272 assembly members were sworn in to represent electoral areas in the various assemblies for a four-year tenure, while an additional 33,500 people who were elected as unit committee members were also sworn in.

The inauguration of the MMDAs was in line with Section (3) of the Local Governance Act 2016, Act 936.

It is early days yet, but the Daily Graphic would like to remind all assembly members, both elected and appointed, that they have taken it upon themselves to spearhead development in their electoral areas and, for that matter, the country.

Such a task enjoins them not to just parade themselves as assembly members; they must endeavour to reach out to the people and help the communities overcome their developmental challenges.

It is, however, unfortunate that a recent study conducted by the Political Science Department of the University of Ghana, showed that metropolitan, municipal and district chief executives do not frequently visit their communities.

The study, titled: “Popular opinion on performance of metropolitan, municipal and district chief executives”, further revealed that “they mostly (51.4 per cent) visit once in a while but nearly two of every five of them (39.0 per cent) indicated that their MMDCEs have never come to their communities at all. Only 2.0 per cent visit weekly, 1.8 per cent bi-weekly and 5.8 per cent monthly”.

We know that some of the assembly members campaigned on promises of addressing peculiar problems in the communities, ranging from sanitation, drainage to bad roads.

The Daily Graphic believes that if assembly members revive the spirit of self-help where they lead the communities, some of the problems can be fixed.

We could not have agreed more with the President when, in his goodwill message read on his behalf, he said the people at the local level deserved nothing but leadership that would improve their standards of living and that assembly members could not afford to fail in that regard.

To be able to achieve this, assembly members must work in collaboration with the chief executives of the various assemblies to bring development to their people.

The Daily Graphic urges assembly members to shun the path of antagonism, bickering and in-fighting, especially going up in arms against the chief executives over issues that could easily be resolved through dialogue and due process.

We must be mindful of the fact that the district assembly concept is to bring governance to the doorstep of the people. Assembly members must, therefore, seek to engage the people and pass on their concerns and other challenges to the assemblies.

We believe that if our assembly members adopt this path of engaging the communities, it will help the citizenry to have a better appreciation of our local governance system.

Invariably, this will also whip up enthusiasm in future district level elections.

The Daily Graphic entreats all assembly members to bring back community development programmes, such as communal labour, clean-up exercises and mobilising members of the community for development projects.

Our assembly members must rise up to shape the development direction of the country as they serve their communities in the next four years.