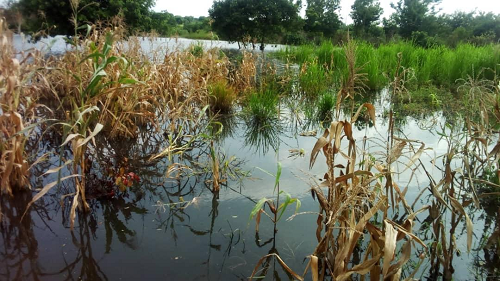 The northern part of the country is often referred to as the food basket of Ghana because it produces large quantities of foodstuffs for the country.

Food items such as yam, maize, millet, rice, groundnuts, beans, soya beans, among others, are produced in abundance in that part of the country.

That is why the heavy flooding in the area is a great concern because of the potential consequence of a looming food crisis in the country. (See front page story).

Torrential rain in the north has worsened the plight of farmers there, as their farms have been inundated, while roads leading to farms are all washed away.

Fortunately, the spillage of the Bagre Dam in Burkina Faso is yet to happen, and it is even unlikely to happen, going by reports reaching the Daily Graphic. Our hope and prayer is that the spillage will not occur, so that it does not worsen an already bad situation.

The Daily Graphic is not oblivious of an imminent food crisis this year unless something dramatic happens. Apart from the current floods, the farming season began with the scarcity of fertiliser, a major agricultural input for farmers across the country.

This was due to the inability of importers to establish letters of credit to enable them to import the commodity because the government could not pay them for the services they rendered in 2020.

Although this was a general challenge, farmers in the northern part of the country in particular were the hardest hit because almost all of them depended on the government's subsidised fertiliser, for which reason its shortage was a big blow.

The development led to many farmers either withdrawing completely from the flagship programme, Planting for Food and Jobs, or cutting back the number of acres they would have cultivated if the commodity were sufficient.

Even though we know the floods will surely recede, the current situation will affect the yield and the onus will now be on farmers in the southern sector to feed the nation.

The Daily Graphic is concerned about this development, particularly when Ghana is touted as a major food basket of the sub-region.

Over the past years, our neighbouring countries have imported large quantities of foodstuffs from us.

We wish to sound a word of caution to our authorities that we cannot afford to allow our neighbours to flood our markets this year under the cover of ECOWAS protocol to cart foodstuffs away.

Last year, for instance, some foodstuff traders from neighbouring countries went to the extent of going to the farm gates to buy maize in the Upper West Region.

We must guard against that practice this year.

It cannot be business as usual. Already, COVID-19 has brought many businesses on their knees globally and many countries are restricting exports, particularly foodstuffs, as the season is unpredictable.

It is high time we also protected our farm gates and stored enough of our agricultural produce to ensure food security so that the prices of food do not escalate beyond the reach of the poor.

It is important for the government, through the National Buffer Stock Company and the Commodity Exchange Market, to step in to guarantee farmers fair prices in order to discourage them from selling to foreigners.

The time has come for us to protect our own to ensure food security.

We have come a long way and cannot afford to drop our guard, for food is life.