A year on, Appiatse on our minds 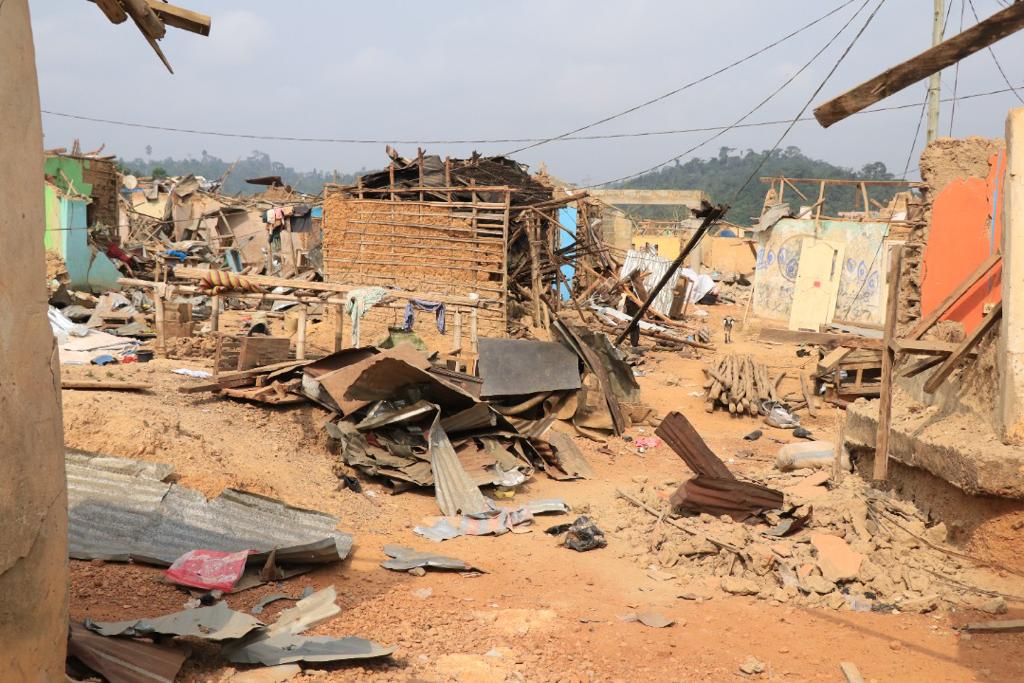 On Friday, January 20, 2023, the nation commemorated the first anniversary of the explosion that occurred at Appiatse, a community in the Prestea Huni-Valley Municipality in the Western Region.

The explosion, which claimed 16 lives and injured 498 others, destroyed the entire Appiatse community.

The tragic incident occurred when a truck owned by the mining explosives manufacturing company, Maxam Ghana Limited, which was carrying explosives to a mining site at Bogoso, collided with a tricycle and caught fire.

A year on, families are still not only mourning the death of their relatives and loved ones, but also counting the loss of economic activities that has imposed a huge financial burden on them.

The Daily Graphic's checks indicate that 16 people are still receiving medical treatment, with two of them bedridden.

While some of the survivors of the tragedy are still fighting for their lives in hospital, others now live with permanent disabilities such as visual and hearing impairments.

Many of the residents of Appiatse are still struggling to regain their economic activities, a year after the explosion.

The situation is dire with those who are still on sick beds as their families struggle to meet the high cost of treatment.

To add insult to injury, the Appiatse Disaster Relief Committee (ADRC), which was set up as the community-based body to see to the welfare issues of the residents of Appiatse, including taking care of the education, health care and livelihood needs of the people, has run out of funds.

However, the Daily Graphic's checks with the Public Relations Officer (PRO) of the ADRC, Thywill Quarshie, revealed that the committee was overwhelmed by financial demands, especially from persons who were still fighting for their lives in hospitals.

It is commendable that the government took bold steps to ameliorate the suffering of the people of Appiatse and bring the community back to life.

For instance, after the January 20, 2022 disaster, President Nana Addo Dankwa Akufo-Addo, through the Minister of Lands and Natural Resources, Samuel Abu Jinapor, set up the Appiatse Support Fund to mobilise funds for the rebuilding of Appiatse.

The Appiatse Reconstruction Implementation Committee was subsequently inaugurated to oversee the reconstruction of the town into a climate-friendly model community.

Mr Jinapor also set up a committee to investigate the causes of the incident and make recommendations on the way forward.

Upon the recommendations of that investigative committee, a team was tasked to review the country’s mining safety protocols, especially those having to do with the transportation of explosives.

This recommendation has been followed through with the rolling out of watertight procedures for conveying mining explosives.

Again, upon the recommendation of the investigative committee, Maxam Ghana Limited, the mining entity at the centre of the explosion, was also fined $6 million.

The government reached an agreement with Future Gold Resources (FGR), the operator of the Bogoso Prestea Mine, and rehabilitated a resettlement community in the area to serve as temporary accommodation for the displaced residents of Appiatse.

Currently, work is ongoing on the first phase of the Appiatse Reconstruction project which comprises 124 housing units at the core of Appiatse as well as roads, drainage and infrastructure for utilities.

Commendable as these efforts by the government and other corporate entities are, it is clear that more work remains to be done to restore life to the people of Appiatse.

It is in the light of this that the Daily Graphic calls on the government and other stakeholders to pay heed to the demands by the residents of Appiatse.

The paper agrees with the PRO of the ADRC that more funds must be channelled into the relief fund to support the health and welfare needs of the people.

We also support the call for a percentage of the Appiatse Support Fund to be deducted into the relief fund to give the ADRC more resources to work effectively.

Also, it is important for corporate bodies, individuals and organisations to continue donating to support the restoration of life to Appiatse.

Again, the Daily Graphic agrees with the call made by the assembly member of the Beppo Electoral Area, Thomas Enyam, that an Education Endowment Fund be set up by the government to support the children of Appiatse.

Equally critical is the need for contractors working on the reconstruction of Appiatse to expedite action to ensure that the September, 2023 deadline for completion is met.

It is obvious that the best way to serve justice to the victims of the Appiatse explosion is for the government to ensure that the right compensation is given them.

All individuals and organisations must play their part in restoring life to Appiatse; after all, like body parts, what affects one affects the other.