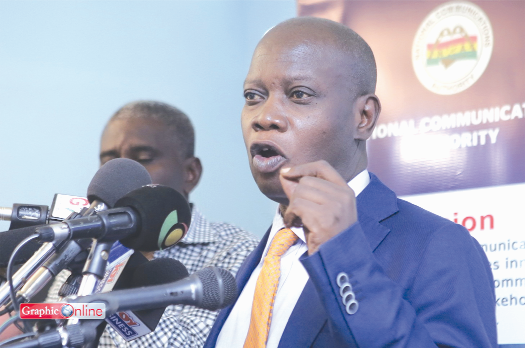 The National Communication Authority (NCA) has pledged its commitment to extend internet facilities to the rural areas of the country to facilitate effective teaching and learning of Information Communications Technology ( ICT) in schools.

Subsequently, it has embraced the Television White Space technology which can travel up to 10 kilometres irrespective of vegetation, building and other objects.

TVWS are frequencies allocated to a broadcasting service but not used locally.

Mr Tevie was speaking at the Public Consultation Workshop on TVWS in Accra yesterday.

The workshop, which attracted key players in the telecom industry, including television operators, was aimed at promoting interaction and building on the component of a proposed regulatory framework on TVWS.

Mr Tevie said apart from the TVWS connecting people, the technology  can make connecting to home or work from another remote area a reality by offering broadband signals capable of handling multiple devices as well as transferring large data across long distances.”

He said, “TVWS will encourage the creation of smart cities with interconnected devices to home, schools, shopping centres, municipal areas and more.’’

Mr Tevie said access to internet connectivity was almost becoming basic human right as consumers have become more dependent on it as a means of communication and as a link to other resources for everyday life.

However, he said, due to environmental obstacles and lack of financial incentives, connectivity was scarce in some areas with low population density.

“This results in expensive and complex networks with lack of options for those in these unserved communities,’’ he said.

Mr Tevie said the NCA believed that with the emergence of TVWS, the issue of inability to serve scarcely populated areas would gradually become a thing of the past.

He said the NCA in 2013 collaborated with Google and other institutions to carry out TVWS trials at Labadi and East Legon and the results of the pilot initiatives had helped the authority to determine its capabilities in reaching far areas.

The Director of Engineering, NCA, Mr Henry Kanor, said the TVWS technology would not dethrone broadband services in the country but rather ensure its protection.

He said the TVWS would help schools in rural areas, especially those writing ICT exams in the Basic Education Certificate Examination (BECE), because the technology is cheaper.

Mr Kanor said TVWS was widely used in the Philippines, where the country has more than 1,000 islands, adding it has facilitated the transmission of data to rural areas.

He, therefore, urged entrepreneurs to take advantage of the TVWS spectrum.

Mr Peter Djakwah, a Deputy Manager of Engineering, NCA, said the increase in the use of the internet had the potential to increase Gross Domestic Product (GDP).

He said it was important that the cost of using internet was reduced to attract larger population usage.