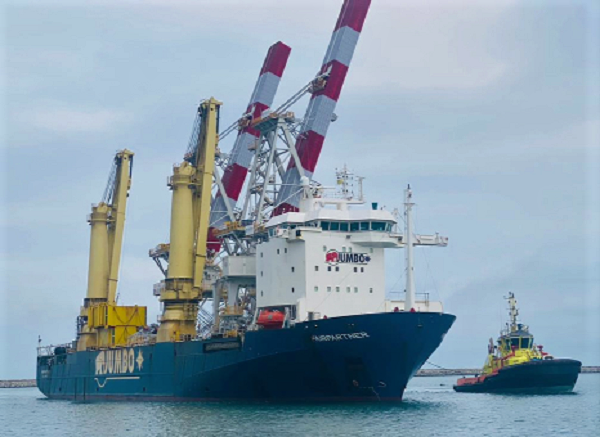 Units of the two ship-loaders and the eco hooper arriving at the Takoradi Port
30.5k Shares

The Ghana Ports and Harbours Authority (GHPA) has taken delivery of two ship loaders and eco hoppers to enhance the operations of the port in its efforts to be the best in West Africa.

The equipment arrived from Dubai over the weekend with the final components to complete the full installation and automation of the newly constructed dry bulk terminal conveyor system at the port.

A ship loader is a large machine used for continuously loading bulk solid materials such as iron ore, coal, fertiliser, grains and/or material in bags onto ships or barges.

It is also cost-effective and environmentally-friendly. It is supplied with loading spouts designed to suit the material to be handled, reducing dust and spillage to a minimum.

An Eco Hopper on the other hand, is an ecologically sensitive solution, fulfilling all needs for the efficient import of dry bulk cargoes. It captures all airborne dust generated from bulk material imports and is eco-friendly.

The hopper has efficient dust control measures to minimise the escape of dust during the grab discharge cycle and allows the port to handle virtually any material without excessive environmental pollution.

The ship loaders and eco hopper with a discharge capacity of 2500 MT/hour as a new conveyor system would be installed at the completed Takoradi Port Dry Bulk Terminal for bauxite and manganese.

The facilities have the capacity to load a total of up to 120,000 tonnes of Bauxite and Manganese in 48 hours, which is said to be a remarkable improvement on the current manual grab system with a loading rate of approximately 8,000 MT/ 24-hours.

Speaking to the Daily Graphic, the Director of Port, Takoradi, Captain Ebenezer Afadzi, described the acquisition as significant as it would enhance operations and greatly support the port and the stakeholders.

The Takoradi Port, Capt. Afadzi said, had the capacity and skills to ensure the efficient running of the newly acquired equipment after its installation, which would be at the dry bulk terminal for the benefit of the port, stakeholders and the country as a whole.

He further explained that the deployment of the ship loaders and the eco hopper would ensure more eco-friendly and significantly reduce dust and other pollutant emissions, making operations at the port environmentally-friendly and sustainable.

The Takoradi Port Director said the completion and automation of the new conveyor system with the installation of the newly acquired equipment would greatly enhance the handling of, especially, dry bulk cargo.

“The completion of the conveyor system automation at the Port of Takoradi is meant to greatly enhance dry bulk cargo such as manganese, bauxite and clinker exports and imports handling operations at Ghana’s premier commercial sea port,” he said.

The Harbour Master of the Takoradi Port, Capt. Richmond James Quayson, who supervised the berthing and receipt of the vessel with the equipment, said the automation of the conveyor system positioned the 16-metre deep and 800-metre long dry bulk terminal to receive bigger vessels.

He said it was the second phase of the expansion project of the port’s facilities to make it more efficient.

“The construction of the dry bulk conveyor system and installation of the ship loaders and eco hopper are part of the second phase of our dry bulk terminal project, solely owned and operated by the authority,” he said.

He said other projects of the second phase included the construction of an administrative block, a workshop, switching station, substations and a complete pavement of the terminal and access road to the terminal.

Capt. Quayson explained that the first phase saw the construction of an 800-metre quay wall with berth pockets dredged to 16 metres deep.

The Marketing and Public Affairs Manager of the port, Dr Kingsley Antwi-Boasiako, expressed the port’s commitment to efficiently manage its operations to ensure that it remained the best in the industry.