Oil blocks to be allocated based on competitive bidding 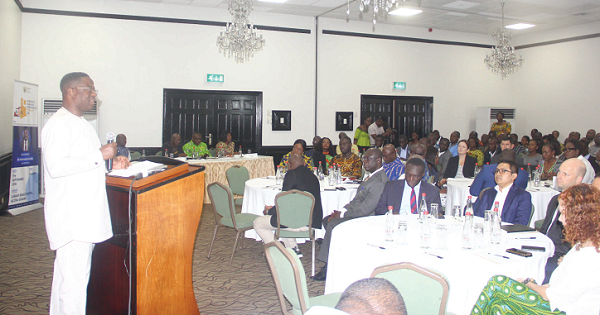 The first-ever competitive bidding for the allocation of oil blocks to companies in the petroleum upstream sector will be launched on October 5, this year.

The new regime, which is in compliance with the new Petroleum Exploration and Production Act, 2016 (Act 919) and the law on local content, is a departure from the previous open-door system where petroleum agreements were signed on a first come, first served basis.

As part of the new dispensation, three oil blocks in the Western Basin, will be allocated through competitive public bidding by the last quarter of 2019.

The workshop was meant to sensitise local companies to the opportunities that are available in the petroleum upstream sector, especially with the coming into force of the new regulatory regime.

It was also to provide a platform for key stakeholders to brainstorm on how to address the challenges in the system to ensure transparency, efficiency, cost-effectiveness and judicious use of oil resources.

The workshop was held on the theme: “Encourage equity participation in the petroleum agreements by indigenous Ghanaian companies.”

Among the key participants were the Ambassador at large, Dr Edward Mahama, the Director of Programmes at the Office of the President, Nana Ama Ntim; and the Chief Executive of the State Enterprises Commission, Mr Stephen Asamoah-Boateng.

Mr Amewu emphasised that the government was committed to seeing through regulations 4(2) of the Petroleum Local Content participation Regulations, 2013, that require that local companies ought to have five per cent equity in all petroleum agreements

"The law gives the first preference to indigenous companies to participate in upstream petroleum activities but most of the time, international oil companies that have the responsibility to encourage the local companies are not working in accordance with the law,” he said.

He also bemoaned the situation where some local companies sold their birthrights by fronting for foreign companies in contravention of the law.

“Regulations 4(2) of Act 919 requires at least five per cent of equity participation of indigenous companies but Ghanaians are rather fronting for foreign companies instead of making good use of the opportunities in the provisions of the law, so we are seen as jokers. If we continue to front for them, we will never be taken seriously in this country," he cautioned.

Mr Amewu stressed that under his watch as the sector minister, all efforts would be made to ensure transparency and accountability in the upstream petroleum sector.

He urged international oil companies to collaborate with local companies and mandated government institutions to ensure that the exploration of oil resources benefited local people.

The Chairman of the Licensing Round Bid Evaluation and Negotiation Committee and Chief Director of the Energy Ministry, Mr Lawrence Apaalse, explained that after the launch of the competitive bid round regime, processes would commence to allocate three oil blocks to companies by the first quarter of 2019.

“For the 2018/19 licensing round, there are three blocks that will be allocated through public tender. Two of the blocks are being reserved for direct negotiation and that will be announced by the sector minister when the bid is advertised, while the other one will be reserved for the Ghana National Petroleum Corporation (GNPC) as required by law,” he said.

For his part, Mr Asamoah-Boateng asked for effective collaboration between local companies and their foreign counterparts to ensure that oil resources were exploited for the benefit of the local people.

He called on indigenous companies to consolidate their positions by forming solid partnerships that would enable them to participate in the upstream petroleum sector.

Mr Asamoah-Boateng also urged oil companies to be responsible in their activities so that the marine ecosystem in coastal communities would not be compromised.