Two of the world's biggest brands are now Chinese 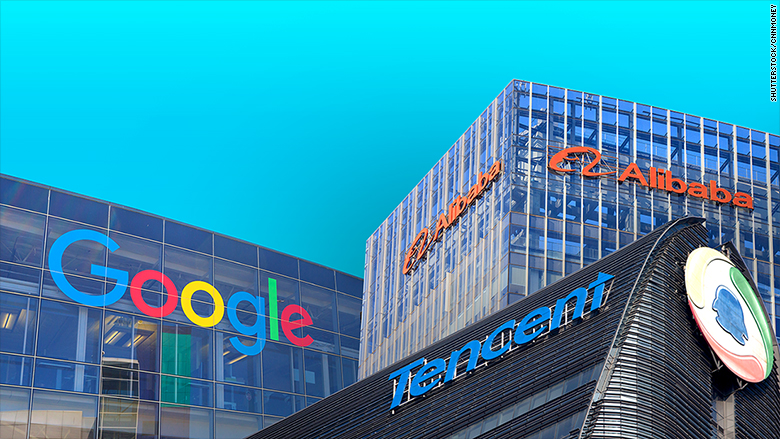 A new list of the world's most valuable brands is out, and China has claimed two of the top spots for the first time.

Alibaba has joined the top 10, alongside Chinese tech group Tencent, as well as stalwarts such as Google (GOOGL) and Apple (AAPL).
Ranked at No. 9., Jack Ma's Alibaba has seen its brand value nearly double to $113 billion as the e-commerce company has expanded further into fields such as mobile payments and cloud computing.
Shenzhen-based Tencent (TCEHY) broke into the annual BrandZ top 10 ranking in 2017 and has gone from strength to strength over the past year. It now holds fifth place -- behind Google, Apple, Amazon (AMZN) and Microsoft (MSFT) but above Facebook (FB) -- with a brand value of $179 billion, up 65% compared to last year.
Tencent specializes in online games, apps, instant messaging services and online payments. It boasts a market capitalization of $490 billion, making it worth more than America's most valuable bank, JPMorgan Chase (JPM).
Here's the list of the top 10:
Doreen Wang, the head of BrandZ, said the new ranking demonstrates that Tencent and Alibaba have overcome numerous China-specific hurdles to become global powerhouses.
"The challenges facing Chinese brands are by no means small," she said. "Limited brand awareness in international markets, a lack of trust due to historic quality issues and a reluctance by Chinese brands to invest in impactful global advertising campaigns has put them at a disadvantage with their more established competitors."
But the rise of China and savvy young consumers has created opportunities for smart entrepreneurs, she said.
"Attitudes are changing, particularly among younger consumers who are falling in love with Chinese brands," she said. "While penetration into US markets may still be at a preliminary stage for both brands, other regions are embracing them."
Alibaba is gaining ground in Brazil, Chile and other Latin American countries, where its online marketplace AliExpress "is rapidly becoming the leading e-commerce platform," said Wang. It also has a strong presence in countries such as Israel, Spain and South Korea.
Tencent has been gaining greater recognition in south Asian markets such as Thailand and Singapore, she said.
The BrandZ ranking is published annually by WPP (WPPGF) and Kantar Millward Brown. Google has been at the top of the ranking for eight of the past 12 years. Its brand is currently valued at $302 billion, up 23% from last year.
Credit: CNN
Follow @Graphicgh
Follow @Graphicgh