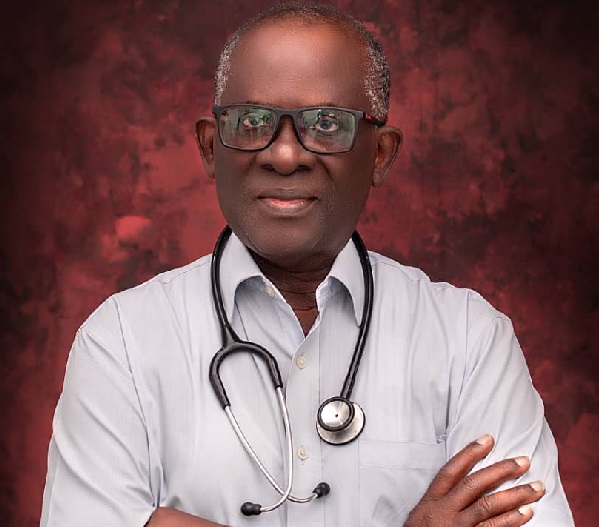 On March 24, 1999, a couple in Adumasi krobo, Mr Benjamin Amui and Mrs Eunice Amui, welcomed a set of twin girls into their home and it was a mixture of joy and shock. Joy at the birth of the twin, but also shock because they were joined together, popularly referred to as ‘Siamese twins’.

The twins were joined from the lower portion of their chest and abdomen and shared a common liver as well as other vital organs.

That shock and fear, however, turned into joy again 56 days later on the 19th of May 1999, when a team of medical personnel did what was seen as impossible at the time and unprecedented.

The team of doctors led by Dr Winfred Mensah Hodasi successfully separated the twins, which was the first in the country. Twenty-two years later after this history, the man who led the team appeared on the Springboard, Your Virtual University, a radio programme on Joy FM, to share his story.

This was a one-off interview dubbed: “Legends of our Time”, which sought to celebrate individuals who have made significant contributions to the country.

Dr Hodasi described this achievement as an incredible experience in his lifetime. He said some many years back, it was impossible to separate Siamese twins, as most of them died before birth, with some also dying few hours after birth.

On how this anomaly comes about, he said: “When the foetus is growing, it divides at a point automatically but at a certain point it stops separating and the development is unable to be fully completed.“

“So they end up sharing certain organs such as the liver, part of the heart and the chest and this makes it very difficult to separate them. The way they are normally joined, sometimes certain blood vessels will pass through the other one and to separate this, you have to destroy one portion, leaving the one.”

“So unless you have a clear-cut plan how to go about it, it won’t be successful,” he explained.

The renowned surgeon pointed out that that anomaly happened with one out of about every 200,000 births.

“It is not a common thing and because of that, it has become difficult to study it well. They are occasional happenings so nobody has been able to exactly find out how it comes about.”

“A bigger percentage of them die before birth, some die within 24 hours and this is because they are not developed enough to exist. And even with this who live and are operated on, some of them don’t live longer,” he noted.

He said it was only occasionally that some of them get to live longer.

Dr Hodasi said it was necessary to have an extensive understudying before one decides to embark on separating conjoined twins.

“Some of them have multiple anomalies and those who have two or three anomalies are able to be corrected and they live longer but in cases where the kids have more than four anomalies, it becomes difficult to make them live.”

“That is why before you even think about separating them, you have to observe them to see whether they have the chances of living,” he stated.

He said attempting to separate them comes with a huge risk, hence the need to observe them for a longer period. On how he first came into contact with the twins, he said he was then the head of the Paediatric Ward, Korle-Bu Teaching Hospital, when they were brought in.

He said although he was not frightened by the situation, he understood the huge challenge it came with.

“They were there for four weeks while I was understudying them and after undertaking all the examinations, I realised they had chances of survival so I decided to carry out the operation,” he noted.

He said there were three other doctors and some nurses who helped in the successful operation.

“At the time, I was able to separate the liver, the whole theatre was full of celebration. The theatre is normally a quiet place but it was as if we were at a football stadium that day,” he recounted.

Dr Hodasi pointed out that, in performing such operations, one does not have to rush the process as every step is very important and crucial.

He said it took him and his team over four hours to successfully perform the operation. “In performing such surgeries, you also have to be sure about which instruments you are supposed to use and be very alert,” he stated.