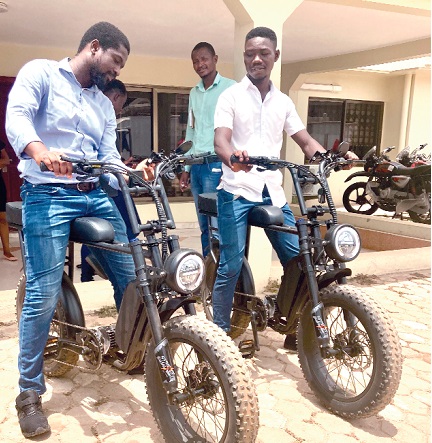 ShaQ Express, a courier company, has started piloting the use of electric (e) bicycles for the delivery of items in Accra.

The company deployed its first set of two e-bikes in Accra last week as part of efforts to operate in a sustainable manner and also cut down on its recurrent expenditure, particularly fuel.

Although a burgeoning business with dozens of delivery companies in operation, not many courier operators use e-bikes – making ShaQ Express one of the first companies to do so in the country.

Its Chief Executive Officer (CEO), Anthony Owusu-Ansah, said the pilot phase was going on well with emissions and fuel turning out to be the two main areas of improvement.

Announcing the piloting phase, Mr Owusu-Ansah said “the future is here and it is indeed electric.”

“We have started piloting the use of our new e-bikes for deliveries as our small way of contributing to Sustainable Development Goals (SDGs) seven and 13 by cutting down on carbon emissions in the environment,” he said.

“This is going to be a game changer in reducing our dependence on fuel and creating a way of serving you better economically,” he added.

Mr Owusu-Ansah said while the bikes performed just like the fuel-driven motorcycles on long-distance journeys, they emitted less to no carbon dioxide and other greenhouse gases that were found to be dangerous to the environment and humans.

That, the CEO of ShaQ said, made e-bikes the appropriate vehicle to use in delivering food and other health essentials such as medications.

Mr Owusu-Ansah Express said the company was beginning to also realise that the use of e-bikes could help it make savings from its fuel expenditure, leading to a reduction in prices for consumers.

“The deployment will reduce our dependence on fuel and generally reduce our operation cost by about 50 per cent to 60 per cent. That will help with the pricing to our end user,” he explained.

He said the savings could also be ploughed back into the business through the creation of more jobs for riders.

Mr Owusu-Ansah said the e-bikes did not require the purchase of petrol or diesel but charging from an electricity source.

He said they could be charged from almost anywhere, provided the electricity source had the appropriate socket to take the charging system of the motor.

According to him, this made the e-motorbikes convenient and more cost-effective to use.

The CEO of ShaQ said at a time when the United Nations (UN) and other global institutions were rallying the world to combat climate change and mitigate its impact on the environment and lives, e-bikes was a major tool to realise that objective.

He said as cities expanded and more areas got urbanised, courier services would become more critical, resulting in the use of many motorbikes and other vehicles to get goods to consumers.

That, he said, had the potential to impact negatively on the realisation of the UN’s Sustainable Development Goal (SDG) 13, which calls for urgent action to combat climate change and its impacts.

Mr Owusu-Ansah also noted that the advent of e-motorbikes, if properly exploited, could help mitigate the impact of a booming courier service business on the achievement of SDG 13.

Going forward, Mr Owusu-Ansah said ShaQ Express would continue to monitor the performance of the two bikes to be able to make an informed decision on the next step to take.

He said at the moment, it was obvious that using e-motorbikes could impact positively on the business and efforts to increase the numbers would be pursued.