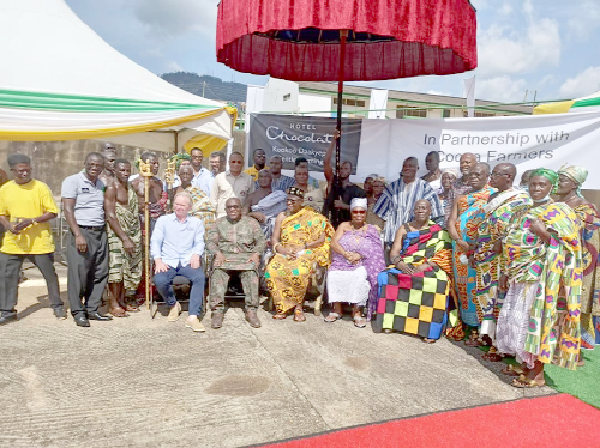 Mr Angus Thirlwell (1st from right seated), Chief Executive Officer of Hotel Chocolat, Nana Effah Pinamang III (seated in middle), Chief of Obomeng Traditional Area, and some representatives of the partners and farmers during the launch

A farmer support scheme aimed at improving the livelihoods of cocoa farmers across the country has been launched.

Dubbed: ‘Kookoo Daakyepa’, the scheme is an initiative of a leading British chocolate maker and cocoa grower, Hotel Chocolat, through its partners, the Cocoa Horizons Foundation, the Green Topics Group (GTG) and Nyonkopa Cocoa Buying Ltd.

Under the Kookoo Daakyepa scheme, Hotel Chocolat and its partners are to pay GH¢100 premium on every standard cocoa bag directly to farmers at the end of the cocoa season.

The payment is to be done through Nyonkopa Cocoa Buying Ltd, one of the partners.

A statement from the partners said the amount would be adjusted yearly, taking into consideration the increases in the cost of living for farmer families.

“Farmers will also benefit from subsidies on pre-harvest farm activities such as pruning and agricultural extension services, promotion of agroforestry and efforts to eradicate child and forced labour.

This programme is also aimed at creating a local hands-on approach where farmers are educated on doing the right thing for the planet and communities through good farming practices,” the statement said.

It said the scheme would target 2,500 farmers around Nkawkaw and Juaso, adding that Hotel Chocolat, through Nyonkopa and Green Tropics, was aiming to put enough money into the pockets of cocoa farmers in the districts to ensure a decent standard of living.

The Chief Executive Officer of Hotel Chocolat, Mr Angus Thirlwell, expressed optimism that the scheme would have a significant impact on the lives of Ghana’s hardworking cocoa farmers, who contributed massively to economic development.

“I will like to emphasise that this is not charity or philanthropy.

We are paying more, voluntarily, because that is what the fine quality Ghanaian cocoa is worth to our brand.

For 15 years, we have been operating our own organic cocoa farm in the Caribbean on an island called Saint Lucia.”

“We are farmers too, highly unusual among chocolate brands.

Everything we have learned as farmers has been folded into this programme,” he said.

The Chief of Obomeng Traditional Area and chairman of the event launch, Nana Effah Pinamang III, urged farmers in the municipality and surrounding areas to take advantage of the scheme by ensuring that they sold their cocoa to Nyonkopa Cocoa Buying Ltd.

He said by selling to the company, the farmers could benefit from the programme.

He also advised cocoa farmers engaged in or are planning to engage in illegal mining or galamsey to desist from the act, given the devastating effects it posed to the cocoa production.

It said such practices were necessary to protect nature to ensure the viability of a more sustainable effort to curb challenges associated with climate change.

“The scheme also requests and requires that farmers plant more indigenous trees on their cocoa farms to reduce moisture evaporation from the earth due to the shade, which increases biodiversity of pollinating insect and animal life and serves as a sequester carbon, benefiting all mankind.

It said Hotel Chocolat had worked with the Green Topics and farmers within the Nkawkaw and Juaso districts since 2002.

It added that in 2018, Hotel Chocolat partnered the Cocoa Horizons Foundation, via its Horizons chocolate purchases programme, to drive positive impact in the above communities.