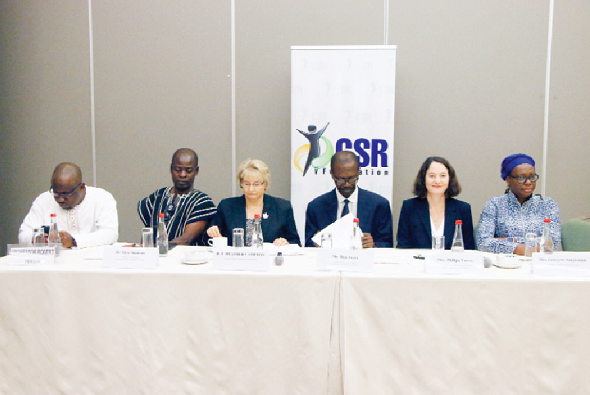 Dr Steve Manteaw (2nd left) with other discussants at the forum
30.5k Shares

The Campaign Coordinator of the Integrated Social Development Centre (ISODEC), Dr Steve Manteaw, has called for a shift from the current system of paying cash compensation for land acquisition to holding equity shares in companies for the future generation.

The current practice, he said, did not augur well for the interest of the future generation as in most cases, the family heads used the proceeds for their personal gains.

In an interview after a forum on promoting sustainable mining for sustainable development in Ghana organised by the CSR Foundation with support from the Canadian High Commission, Dr Manteaw said the negotiations around land acquisition was one of the main drivers of conflict in mining communities.

“That process in my view deprives the future generation of an inheritance. Going forward, my proposal will be to address the inter-generational interest in land when you are paying compensation.”

“You can pay a portion in cash to the family head and the other half of it is invested in the company, so that year on year when dividends are declared they also benefit from the transaction under that arrangement,” he said.

Dr Manteaw said per the current system the cash compensation package was often paid to the family heads of the areas in which the land had been acquired.

“If you have a reckless family head who does not invest the money but spends the money in his lifetime, dies and goes away, the successive generation comes and inherits no land,” he said.

“How else do you expect them to actually earn a living? So they go back to the land as it is their rightful inheritance. But there will be contestation around it whether they have a right because someone has taken the compensation already,” he said.

The Canadian High Commissioner to Ghana, Ms Heather Cameron, said CSR was a very important activity in the mining sector, since it allowed the integration of the social, environmental and economic concerns of the people into their values and operations in a transparent and accountable manner.

“CSR is important to the Sustainable Development Goals (SDGs) agenda because when done properly, it can help alleviate poverty, protect the environment, and favour job creations in the communities in which mining companies operate and at the national level,” she said.

She said CSR programmes could support the improvement of the living conditions of local communities and the development of social and human capital through training, employment and the creation of microbusiness.

Ghana’s mining sector, she explained, remained the main focus for Canadian firms because of its growth potential.

“With billions in investments in Ghana, Canadian mining companies are employing thousands of Ghanaians, and promoting high ethical standards in the industry. They are contributing to local value chains and to community development,” she said.