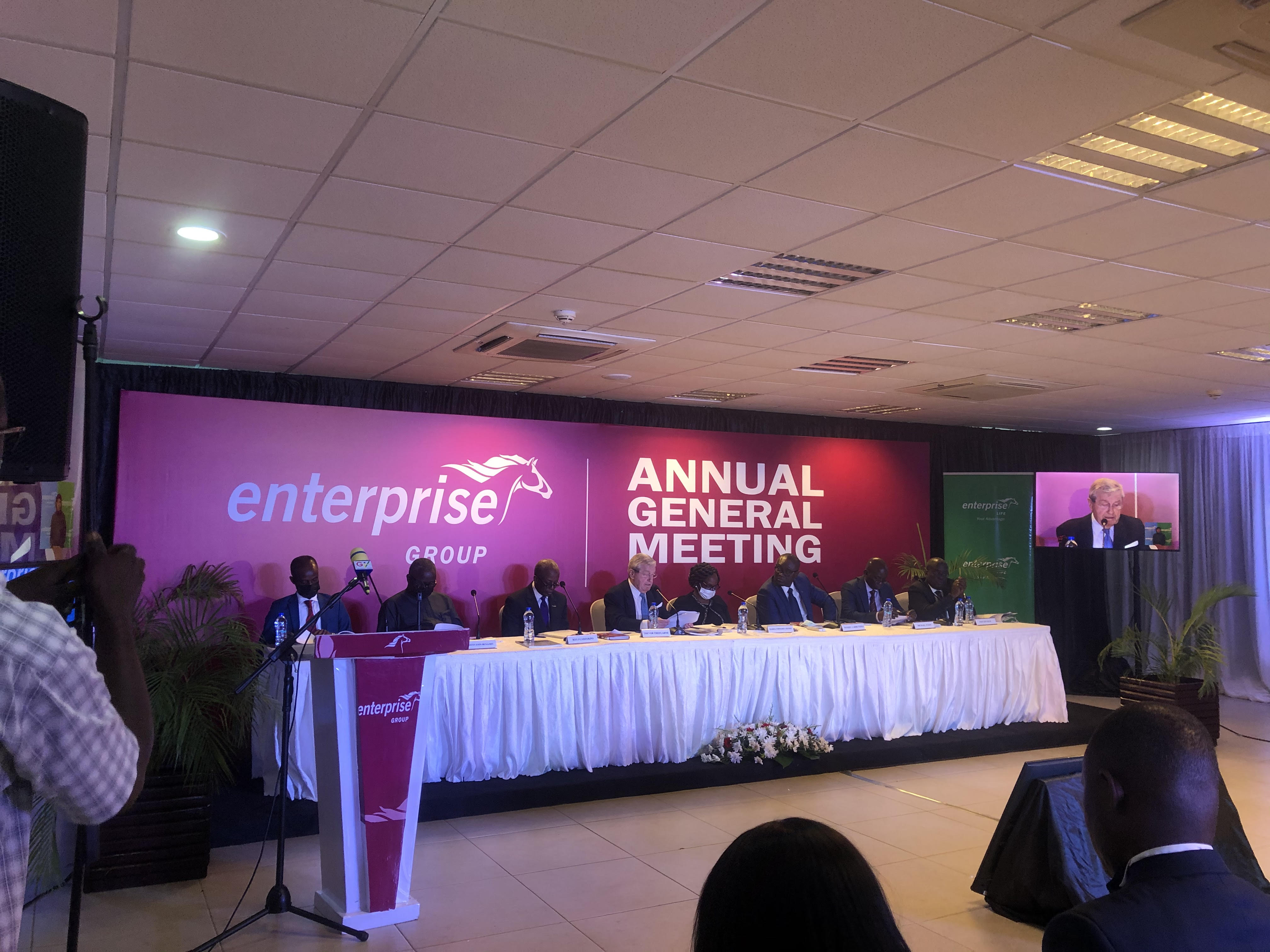 PROFIT of Enterprise Group declined by 16 per cent last year.

The decline in profits was attributed to a 72 per cent increase in benefits and claims payments which was occasioned largely by high surrenders and early encashment from the group’s life operations.

The Board Chairman of the Group, Trevor Trefgarne, announced this last Tuesday at the group’s annual general meeting (AGM) in Accra.

He said the rebound of the Stock Exchange reflected in the improved overall market capitalisation of the group which added GH¢10 billion to end the year at GH₵64 billion.

“The increase of 99 per cent in share price exceeded the 24 per cent growth in total assets at the end of the year.

The growth seen in our share price on the market in 2021 is welcoming, however we will continue to engage market participants so investors can be fully aware of the strengths of our businesses and better appreciate the value of Enterprise Group,” Mr Trefgarne said.

The Chief Executive Officer (CEO) of the group, Keli Gadzekpor, said his outfit’s topline results in the pandemic year stood testament to the resilience of the group’s differentiated business model- a customer-centric one, well supported by a diversified distribution architecture, market leading innovation and trusted brand.

“We ranked consistently as the number one in both Life and General Insurance sectors in terms of gross premium, closing the year with a market share of 18 per cent of the total insurance industry in the country.

We also maintained our positions as number one in pensions business with 20 per cent of the assets under management in Ghana,” he said.

He said the key drivers of the performance were a 28.78 per cent growth in insurance premium revenue from GH¢651.4 million to GH¢838.7 million, with the group’s life insurance businesses contributing 72.6 per cent, non-life 22 per cent and health insurance 5.4 per cent respectively.

Mr Gadzekpor said a standout for the year was the uplift in funeral services fees that increased from GH¢10.1 million in 2020 to GH¢15.5 million, representing a 53 per cent growth.

He said “pension fees grew by 29 per cent, while investment income increased by 83 per cent and rental income up by 134 per cent.”

“We continue to have momentum across all our five growth levers- insurance premium, pension fees, rental income, investment income and funeral services income as we seek to diversify our revenue,” he said.

Mr Gadzekpor explained that in the year 2021, digital transformation became the norm such that digital was no longer “a good to have but a necessity.”

He said the group’s ethos of leveraging technology and investing in digital assets, with a focus on customer-centricity, paid off handsomely during the pandemic as it was able to seamlessly transition to the digital mode of doing business with a few initiatives which provided impetus to the digital agenda.

“Our fundamentals remain strong, and we continue to invest and pursue our strategy. Our digital transformation accelerated, both because of the substantial investments we have made over the years and the way the pandemic forced our employees to work remotely.

Our West Africa footprint expanded, notably in Nigeria. We ended the year with a stronger balance than we began,” he said.