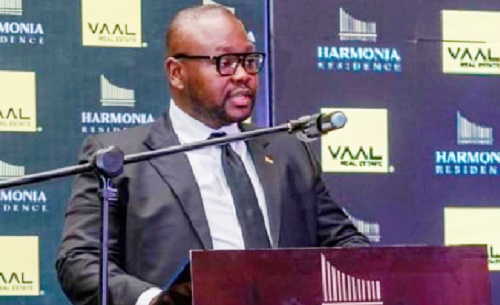 As part of efforts to increase the affordable housing stock in the country, the government is reaching out to the private sector to play a role in that space.

This comes at a time when real estate developers are mostly investing in projects that can only be acquired by the middle to high income earners.

To reverse the trend, the Minister of Works and Housing, Mr Francis Asenso-Boakye, has urged private real estate developers within the housing sector to invest in affordable housing units to bridge the housing deficit in the country.

According to him, many of the apartments in the city are for high income earners, a situation which makes it virtually impossible for those in the lower income end to acquire.

“So there is the need for real estate developers to go into affordable housing units,” he stated.

Mr Asenso-Boakye who gave the advise last Thursday at the launch of Vaal Real Estate’s Hormonia Residence in Accra said as part of measures to reduce the cost of construction for developers for buildings to be affordable for Ghanaians, the government is offering good incentive packages such as tax incentives and free land to real estate developers.

He did not elaborate but said: “For us, that is our target, because the housing deficit is so huge and one surest way of bridging that gap is to encourage developers to go into affordable housing for Ghanaians to have access to homes.”

The Minister said the government was establishing a council to regulate the practise of the real estate sector, the conduct of practitioners, sale, purchase, rental and leasing of properties.

He said the goal of the council is to prohibit unlicensed persons in this sector as well as stop the menace of money laundering in the real estate.

That, he said, would create an enabling environment for real estate to thrive.

The project forms part of an expansion plan which will see Vaal Real Estate develop another project in the second quarter of this year.

Located at the Airport Residential Area in Accra, the apartment is fully furnished, with a great view and close to facilities such as supermarkets, schools, hospitals and malls.

It also has a spacious parking space with a gym and a 24/7 security service.

The Chief Executive Officer (CEO) of Vaal Ghana, Mr Alaa Zayed, said his outfit was focused on investing in housing units to satisfy the needs of prospective customers.

“Our focus is not just to sell our housing unit but to invite the public to join the ‘Harmonia’ community,” he added.

The Sales Manager for Vaal Kenya, Mr Prit Shah, said aside providing houses for the public, the company also aims at providing job avenues for the youth in beneficiary countries.

“In Kenya for instance, a success story from there is that we have built thousand homes within six years with 500 indirect employees and 70 direct employees,” he stated.