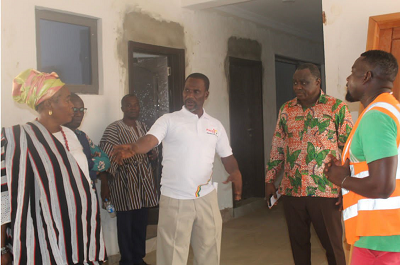 Some members of PIAC during the project inspection Follow @Graphicgh

Some tertiary students have advocated the use of petroleum revenues to fund infrastructure and policies to enhance tertiary education.

The students and faculty of educational institutions in the Northern and Western Northern regions, namely: Gambaga College of Education, Nalerigu College of Nursing and Midwifery both in the North East Region, University for Development Studies- Nyankpala, made the appeal during an engagement with the Public Interest and Accountability Committee (PIAC), the statutory body charged with oversight responsibility of the management and use of the country’s petroleum revenues.

A media release issued in Accra by the PIAC on May 18, 2022, said the public engagement was in line with the second mandate of PIAC, which is to provide space and platform for the public to debate on whether spending prospects and management and use of revenues conform to development priorities.

It said that the PIAC also carries out inspections on projects that have received funding from the Annual Budget Funding Amount (ABFA), in line with its third mandate, which is to provide independent assessment on the management and use of petroleum revenues to assist parliament and the executive in the oversight and the performance of related functions.

“The inspection is to verify the existence and progress of the projects, and assess their usefulness to the community, if completed,” it said.

During the latest project inspection and regional engagements simultaneously in the Western North and North East Regions from April 24 to 29, the committee at Sefwi Wiawso, inspected the construction of a three-storey Regional Coordinating Council (RCC) administration block and the construction of three senior staff bungalows, and a rural market in Amoaya in the Bodi constituency.

“During the visit, the committee found that the building had been completed, commissioned, and in use. Members were generally of the view that the project had been well executed,” it said.

The senior staff bungalows received a total of GH₵1,779,660 from the ABFA in 2020. The project was reported to be 90 per cent complete with bungalows erected and roofed, internal finishing virtually completed, and external works ongoing.

The rural market, situated in Amoaya, received GH₵107,327.70 from the ABFA in 2020, but work had stalled due to the delay in the release of funds by government.

Members of the Committee were however informed that the district assembly was exploring other options to get the market fully constructed for use by the community.

“The Committee recommends that government should disburse funds for speedy completion of the project to serve the community as the project was executed at the request of the assembly,” it said.

In the North East Region, PIAC together with officials of the East Mamprusi Municipal Assembly and RCC, inspected a 1,000-metric tonne warehouse with ancillary facilities at Gambaga, which had received GH₵1,330,932.11 from the ABFA in 2019 and 2020.

Although the facility was commissioned in 2021, it became operational in 2022. The Committee recommends the execution of more of such projects and the installation of adequate systems and equipment for effective operation of the facility.

The upgrading of the Nalerigu - Gbintri road, which had been allocated GH₵20,000,000 from the ABFA in 2020, was also inspected by the PIAC Team and officials of the Ghana Highway Authority. Outstanding works include clearing and road widening works on some sections, with earthworks and culvert works ongoing.

The 40-km road spans over 15 communities, and when completed would ease transportation within these communities. The physical progress of the project stands at about 32 percent. Work done was assessed to be satisfactory.

The third project inspected by the Committee in the company of officials of the RCC was the construction of a 3-Storey Administration Block for the Council, located in Nalerigu. Construction commenced in 2019, and the project was expected to have been completed in 2021. Outstanding works include painting, tiling, electricals, and furnishing. A total of GH₵8,604,336.59 from the ABFA went into financing the project in 2020 and 2021, with the project currently at a physical completion stage of 78 percent. The Committee recommends the timely completion of the project to end the continuous rental of office by RCC.

In both Regions, the Committee held regional public fora on the 2021 PIAC Annual Report, which brought together stakeholders from the traditional council, religious groups, security agencies, traders, educational institutions, among others to deliberate on the management and use of petroleum revenues.