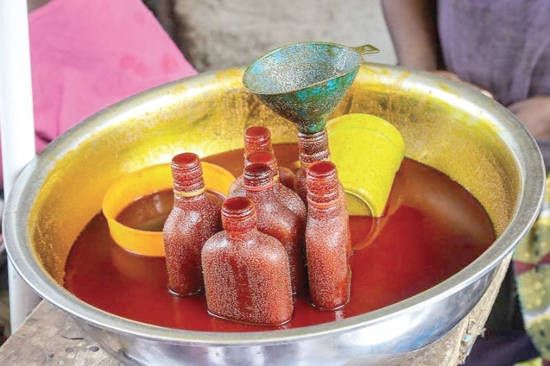 Due to production shortfall, he explained that the country “imports about 50,000 tonnes of palm oil every year to meet demand, especially in the healthcare, pharmaceutical and body lotion industries.”

Briefing the press at the third Sustainable Palm Oil Conference, hosted by the Roundtable on Sustainable Palm Oil (RSPO) and Proforest, on August 20 in Accra, Mr Baffoe observed that the country imported more because the industry was dominated by smallholder producers whose output did not meet demand.

“Part of the problem for the high import is because the oil palm sub-sector is dominated by smallholder producers who account for 80 per cent of the entire industry yet are not able to meet demand.

“For instance, an assessment of the industry showed that while the big companies are producing 20 tonnes of palm oil per hectare, the smallholder producers are able to do two tonnes per hectare.

“The reason for this imbalance is because the smallholder producers do not have the technical knowhow to improve on their yield and so if we can address the productivity challenges, Ghana could become a net exporter,” he said.

Out of the 300,000 hectares of palm cultivated in the country, he stated that 60,000 hectares were owned by the big firms while the rest belonged to the smallholder producers.

“A sustainable palm oil industry in Africa is something we are deeply committed to – and it is wonderful to have so much interest from companies and other stakeholders.

“We look forward to seeing these connections deepen as a result of this conference, as we all work together towards an industry which contributes to the economic development of African countries while preserving the crucially important biodiversity of the region,” he added.

Mr Baffoe stated that industry stakeholders were optimistic that the draft bill for the development of the tree crop sector would shortly be approved by Cabinet, prior to its submission to Parliament.

He said the bill, when passed by Parliament, would establish the Tree Crop Development Authority (TCDA).

The proposed authority will provide policy direction and regulation for the development of the sector.

The Deputy Minister of Agriculture for Liberia, Mr Robert Fagans, said “working with smallholder producers to improve their yields through sustainable farming methods is critical for palm oil growth in Liberia.”

The Governor of Edo State in Nigeria, Mr Godwin Nogheghase Obaseki, called for strong collaborations between governments and the private sector to encourage sustainability in the palm oil value chain.

“Sustainability should not be the preserve of some few companies; everyone must get involved to help grow the industry. If you are not part of the solution, then you are part of the problem.

“Let me commend all of you here today for demonstrating your commitment to a solution. It is in the interests of all of us in Africa to make sustainable palm oil the norm,” he stated.