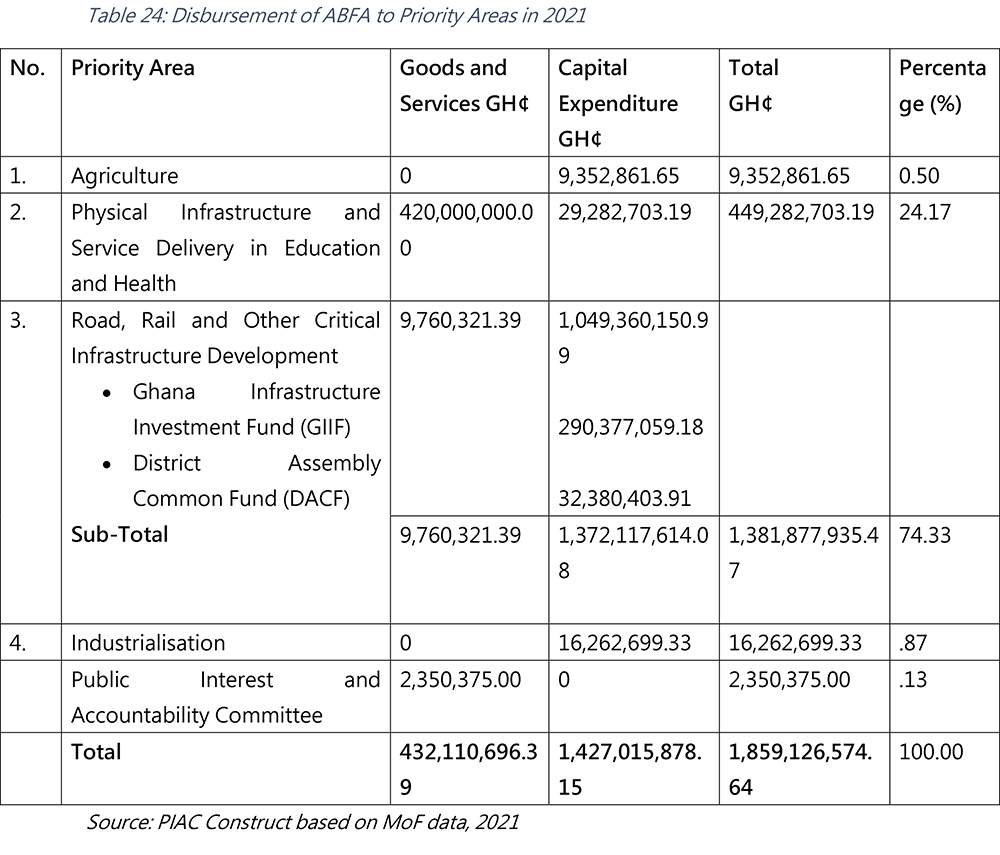 An amount of GH¢9,352,861 million of the Annual Budget Fund Amount (ABFA) was disbursed to the agriculture sector as a selected priority area for spending of oil revenues in 2021, the Annual Report of the Management and Use of Petroleum Revenues for 2021 has revealed.

The amount, representing 0.50 per cent of the ABFA was spent entirely on public investment expenditure and the distribution to the agriculture priority area for 2021. It was, however, 88.16 per cent lower than that of 2020 figure of GH¢79 million.

In 2019, ABFA to the agric sector was GH₵71.6 million. The ABFA is the annual allocation to the national budget from petroleum revenue for current spending.

According to the report launched in Accra on April 13, 2022, by the Public Interest and Accountability Committee (PIAC), about 85 per cent of the disbursement to this priority area was made to the Ministry of Food and Agriculture (MOFA) to support one of the government’s flagship programmes, Planting for Food and Jobs (PFJ).

“The funds were used for the construction of units of 1000 metric tonnes (mt) warehouses, small irrigation dams and ancillary facilities. The rest of the funds were disbursed to the Ministry of Fisheries and Aquaculture for the construction of the National Aquaculture Centre and Commercial Farm in Dahwenya, as well as access and internal roads at the Anomabo Fisheries College,” it said.

The Petroleum Revenue Management Act (PRMA) 2011 (Act 815) provides that the ABFA shall not be more than 70 per cent of the benchmark revenue, which is the estimated revenue expected from petroleum operations by the government for a financial year, net of the amount ceded to the national oil company.

The PRMA also requires allocation to the ABFA to be guided by a medium-term development strategy aligned with a long-term national development plan. However, in the absence of the plan, the government selects priority areas on which to focus its spending of petroleum revenues.

“It is the expectation of PIAC that since 2022 is the last year for the current priority areas, a review of the performance of the current selection will be conducted with a view to informing the selection of the priority areas for the period 2023-2025, as required by the Act.

“This will help fulfil the purpose of the Act to maximise the impact of the petroleum revenue through prioritisation,” it said.

In the 2021 Budget Statement and Economic Policy projected ABFA was US$421.89 million which constituted 70 per cent of the benchmark revenue of US$602.70 million, as required by the PRMA.

The PIAC in its assessment has called for an impact evaluation of the priority areas that are selected.

It said that in the face of a lack of clarity about the basis for selecting priority areas, the selection of new priority areas must be guided by detailed impact evaluation of the ABFA expenditures.