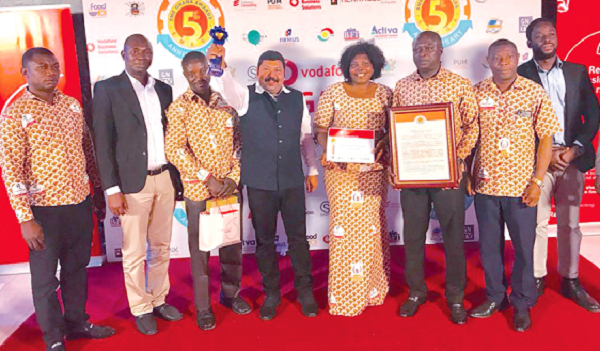 The cocoa buying company, which is a subsidiary company of Barry Callebaut, the world leading manufacturer of high-quality chocolate and cocoa products, was adjudged the best agro commodity trading company and rewarded with a Community Impact Award.

In a citation that accompanied the award, Nyonkopa Cocoa Buying Limited was recognised for its level of excellence, social commitment and vital contributions to the development of business in Ghana.

It stated that over the years the company had demonstrated a staunch commitment to business development in Ghana.

“The commitment of the company is evident in the injection of $50 million into their operations in the country and a massive infrastructure development from 2015-2016”, it read.

The citation praised Nyonkopa Cocoa Buying Limited for its dedication to improving livelihood and contributing to the economic development of the country through provision of jobs for indigenous people across the cocoa growing districts.

He reaffirmed the company’s commitment of achieving the government’s vision of producing one million metric tonnes of cocoa yearly.

He said as part of measures to achieve the vision, the company had signed an LOI (Letter of Intent) with COCOBOD on increasing the yield, climate smart cocoa, replanting and eradication of child labour in the cocoa supply chain.

“We are also closely working with COCOBOD to address the problems of ageing farmers and farms,” he said.