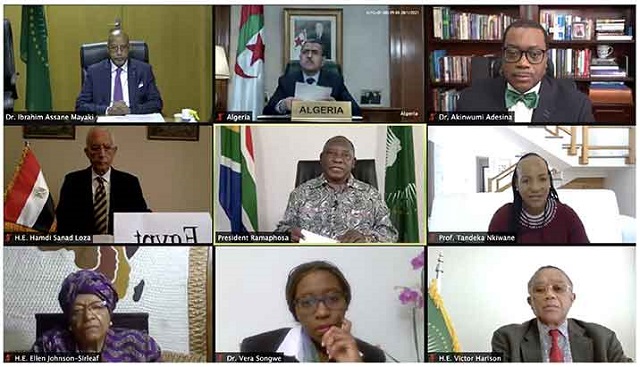 Abidjan, Cote d'Ivoire, 28 January 2021 - African leaders and representatives from the development community, civil society and private sector came together on Thursday for a symposium to celebrate two decades of the New Partnership for Africa's Development (NEPAD), a flagship programme of the African Union.

Participants commended the African Development Bank highly for its role in financing infrastructure and agricultural programs on the continent.

NEPAD has endured multiple global crises since its inception, the most recent being the ongoing COVID-19 pandemic. The organization was relaunched as the African Union Development Agency-NEPAD (AUDA-NEPAD) in 2018, which participants noted was a turning point in its evolution.

South African President Cyril Ramaphosa, Chairperson of the African Union, said: "The coronavirus pandemic has had a severe impact on African economies, on public health and indeed the African Union itself. It has served as a stark reminder of our global interconnectedness because, in the end, what affects one, affects us all."

Ramaphosa added that it was more critical than ever that countries increase collaboration, in particular as they undertake the "massive task" of procuring and distributing vaccines.

"NEPAD's track record makes it the ideal institution to implement Agenda 2063 on behalf of the African Union," President Kagame said via recorded message. "I call on member states to continue supporting the multiple partnerships that AUDA-NEPAD has developed."

Kagame singled out AUDA-NEPAD's agreement with the new African Continental Free Trade Area (AfCFTA) Secretariat as being of particular importance. He said: "Honoring our statutory commitments as member states is not only our duty. It is good value for money."

During a presidential dialogue, African Development Bank President Dr. Akinwumi A. Adesina said that over the past 20 years, the Bank's strategies had been designed with NEPAD in mind.

"The Bank's support has spanned many areas, such as regional integration, agriculture, trade, infrastructure, education, knowledge and the environment," Adesina said.

The African Development Bank President cited the Bank's key role in the Program for Infrastructure Development in Africa (PIDA), including financing of US$9 million for capacity building and technical assistance. "The African Development Bank stands fully ready to continue to provide strong support and to help to mobilize a lot more support for AUDA-NEPAD as you continue your new strategy, and of course the African Union Commission. Together we will achieve the Africa we want, better and much faster," Adesina said.

Two of the founding fathers of NEPAD, former South African president Thabo Mbeki and former Nigerian president Olusegun Obasanjo, recalled the genesis of the institution in 1963 as a platform to lobby for independence, as well as its rebirth in 2002 as the African Union, with NEPAD as its economic blueprint as development took center stage.