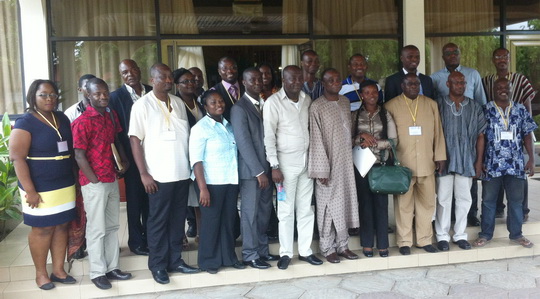 The former Majority Leader in Parliament, Mr Cletus Avoka, has reminded members of Parliament that the natural resource sector of the country remains the most delicate sector of any country’s economy, which must be accorded adequate attention.

He said building the capacity of MPs was crucial and that any compromise or lapses on the capacity of members of the committee would undermine the responsibility entrusted to the Committee on Mines and Energy and jeopardize the future of the country.

Speaking at Busua Beach, Takoradi, at the overview of key challenges and opportunities of the extractive industry to the country, he told the committee to ensure that the country benefited fully from its natural resources.

Mr Avoka said “It is therefore, refreshing to note that an induction workshop to sensitize the MPs on revenue management in the oil and gas sector as well as the mining sectors is being organized for members of the committee.”

He said the general consensus however, was that the associated problems that came with natural resources could be avoided if Members of Parliament with the support of civil society organizations discharges its responsibilities effectively by ensuring transparency and accountability in the sector.

“Fortunately, the Parliament of Ghana is receiving support to drive the needed blessing and also fortunate to learn from both the bad and best practices regarding legislation in the natural resource sector,” he said.

He said the country therefore, did not have any excuse to fail, saying “We must do all that we can to secure the future of this nation.”

Mr Avoka who is also member of Parliament for Zebilla Constituency, noted that in 2007, when commercially viable quantities of oil and gas was discovered, revenue from it was estimated about $1billion which was equivalent to the amount of development assistance the country received from the donor community every year.
He said it was therefore important that members step up the plate and grasp concepts to enable them deal with issues in the interest of the country.

Mr Avoka said the oil and gas sector no doubt was very dynamic in terms of policy directions and technology and to deal with issues, it was incumbent on the Members of Parliament especially members of the committee to be abreast with new developments in the sector in order to offer the best policy directions and legal frameworks in the plenary.

The Executive Director of Strengthening Transparency, Accountability and Responsiveness in Ghana (STAR-Ghana), Mr Ibrahim Amidu Tanko said the extractive sector holds the key to the development of the country and ought to be managed well.

He said noted that the work of the committee was very crucial and that beyond the members of the committee, more MPs must have knowledge about the dynamics of the sector.

The programme which was supported by the European Union (EU), United States Agency for International Development (USAID) and DFID was attended by members of the select committee, officials of STAR-Ghana, Revenue Watch and GIZ.

STAR Ghana said its overall goal was to increase responsiveness and accountability of government, traditional authorities and private enterprises to the citizenry and to enable citizens to hold government and other leadership accountable.