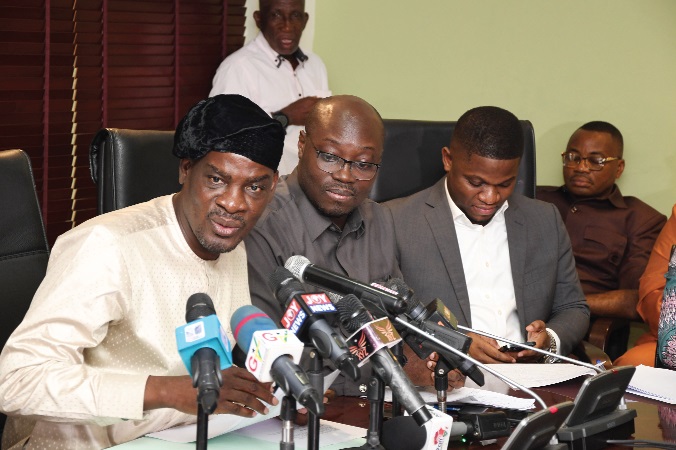 The Minority in Parliament has called on the government to suspend the domestic debt exchange programme (DDEP) immediately and embark on a thorough dialogue with stakeholders.

That will enable the state to achieve the best workable measures for a smooth operation of the debt exchange programme, the caucus said.

Addressing a news conference in Accra yesterday, the Minority Leader, Haruna Iddrisu, said the debt exchange programme in its current form would create extreme hardships for millions of Ghanaians and financial institutions.

“The inclusion of individual bondholders in the DDEP is the biggest transfer of funds from the pockets of Ghanaians to the government and will leave affected persons, mainly the middle-class, impoverished while worsening the plight of the poor, and this must immediately be stopped,” the Minority Leaders stated.

Present at the news conference were the ranking Member on Parliament’s Finance Committee, Dr Cassiel Ato Forson; the National Communications Officer of the NDC, Sammy Gyamfi; the Member of Parliament (MP) for Ketu North, James Klutse Avedzi and MP for South Dayi, Rockson-Nelson Etse Kwami Dafeamekpor, among others.

The government is seeking $3 billion in financial support from the IMF in a bid to stabilise the economy.

As part of the deal which has come about as a result of unsustainable high debt levels, the government must show how it intends to reduce its debt burden to sustainable levels within three years.

Meanwhile, as a precondition for the IMF management and board to approve the staff-level agreement with the country, the government must secure the approval of its creditors.

As part of that arrangement, the government has proposed that all bondholders will not receive any interest on their bonds for the 2023 financial year.

Since its announcement in December 2022, several experts and bodies have kicked against the Programme.

Touching on the potential impact of the programme on the entire financial and banking sector, Mr Iddrisu said restructuring domestic debts would undermine the health of the banking system, since capital adequacy would become a challenge.

He explained that with over GH¢60 billion locked up in government bonds, the non-receipt of any interest this year and paltry sums in subsequent years, would prove the undoing of some banks.

“Not paying them any interest in 2023 would effectively sound the death knell to these banks with its attendant consequences on depositors and employees who would have to be laid off,” Mr Iddrisu added.

He said the programme would also affect the value of tier two and tier three pension funds. Pension as pay-outs were likely to drop further from their already low levels.

“We are at a loss as to why individual pension contributors have not been offered the same exemptions that tier one and two contributors have been given and this anomaly must immediately be rectified,” Mr Iddrisu stated.

“The government is simply imposing an almost 80 per cent tax in present value terms on the savings of Ghanaians and our bank balances without any consultations with affected individuals,” the Minority Leader lamented.

“It is obvious that the government is transferring the responsibility to address the debt burden it has created through reckless borrowing and populist fiscal policies to only innocent Ghanaians and the financial sector,” the Minority Leaders added.

Mr Iddrisu said the country’s economic difficulties could have been avoided if the government had heeded wise counsel from the opposition and civil society on prudent management of finances and the economy.

“We demand further demonstration of responsibility from government through more substantial cuts in non-essential expenditure and a reduction in the humongous size of government,” he stated.

He also announced the caucus’ intention to embark on a nationwide road show to foster deeper understanding of the matter and rally Ghanaians to demand a more favourable resolution of the unprecedented economic crisis the economic management team had plunged the country into.

Meanwhile, the Ministry of Finance has extended the deadline for voluntary uptake of the Domestic Debt Exchange Programme (DDEP) from yesterday to January 31, this year.

The extension, according to the ministry, was to help deepen stakeholder engagement on the proposed policy.