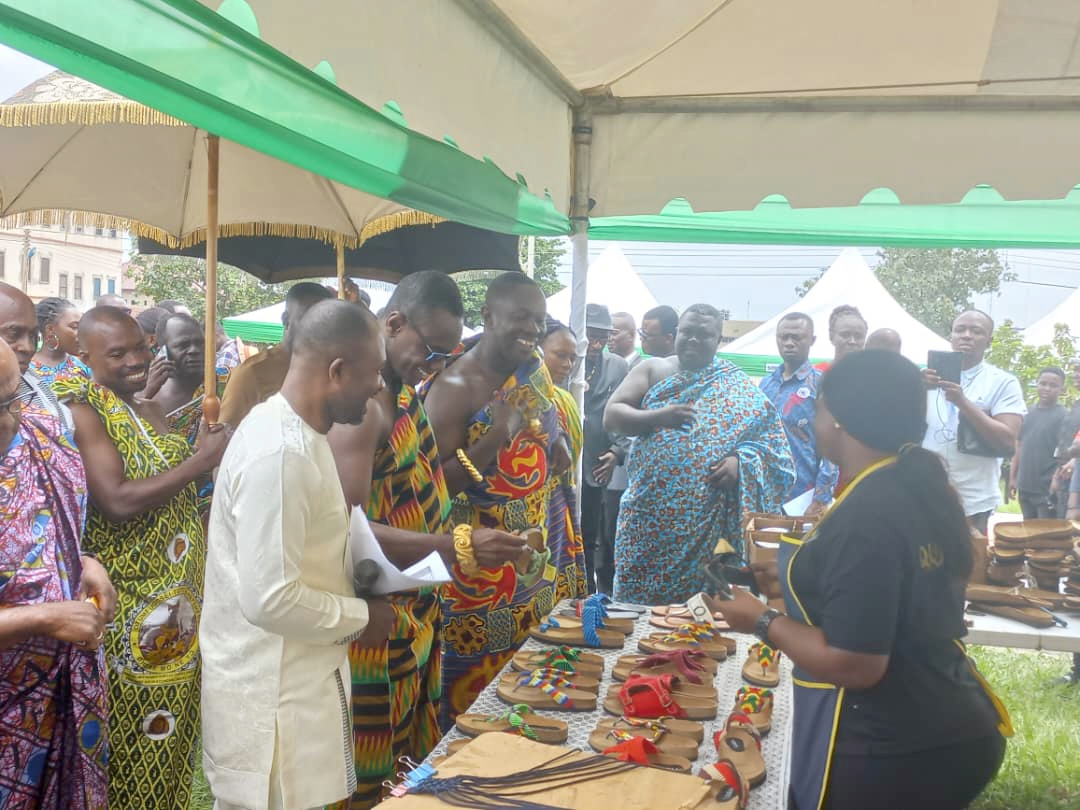 Oheneba Yaw Sarpong Siriboe, Akyimpemhene of Juaben and Nana Owusu Afriyie IV, Apagyahene of Kumasi at one of the exhibition stands at the fair.
30.5k Shares

A maiden Youth in Agribusiness Festival organised by the John Agyekum Kufuor (JAK) Foundation was held in Kumasi to showcase the outstanding development of young people within the agribusiness sector in the country.

The three-day festival, which was on the theme: “Youth in Agribusiness in Ghana: The story so far and the way forward,” targeted people aged between18 and 35.

Giving the rationale for the festival, the Convener, Jeffrey Agyemang-Duah, said the festival was to motivate the youth to accept agriculture and its related activities as a commercial business venture by showcasing the success stories of those already in it.

“By getting more young people into agribusiness through this festival, we believe, it will contribute to the reduction of youth unemployment in Ghana which unfortunately, shot from 8.72 per cent in 2019 to 9.46 per cent in 2020, according to International Labour Organisation,” he said.

He said the 21st century required people who were technologically savvy to lead the transformation of the agriculture sector and since the youth were those involved in ICT, “this is the time for them to get involved and create jobs and opportunities for others.

“We hope to create linkages and networking space among young agribusiness entrepreneurs with industry leaders and investors,” he observed.

The Chief Executive Officer of the foundation, Prof. Baffour Agyeman-Duah, said the programme was to create a platform for all the players within the sector to come together to share ideas and generate business ideas.

He said agriculture held the key to the development of the country as it had lot of opportunities within the value chain and could create jobs for the teeming youth.

Prof Agyeman-Duah said from planting through harvesting, transportation to processing, there were lots of jobs that could be generated and employ more people.

He urged the youth not to look at only white collar jobs as the only means of employment, but to look at farming or agriculture that, according to him, held the key to unemployment problem facing the country.

The Akyempinhene of the Juaben Traditional Area, Oheneba Yaw Sarpong Siriboe, urged the youth to reduce the time spent on social media and put the time into productive use such as researching on how to improve the agricultural sector.

He said farming was no more what it used to be in the past, which, he said, was mainly for subsistence.

According to him, “now, farming is a big time business and requires innovations and the use of technology.

“It is no more a profession for the aged, uneducated and the unskilled,” he said.

Sharing his experience as a farmer with the participants, the Akyimpenhene told the youth that there were lots of prospects in agriculture and its value chain and encouraged the youth to get involved using their ingenuity to bring innovations into the sector.

He said the demands of the day were such that the sector required people with the technical knowhow and the ability to turn the raw materials into processed foods and add value to the produce.

It was in that vein that he called on the youth to channel the time they spent on social media engaging in unproductive things into research and bring innovations to improve the sector, saying, “it would not only support the sector, but also generate income for them.”

Oheneba Siriboe said he had not regretted venturing into farming some two decades ago after completing university and “it has been very rewarding.”

Notwithstanding the prospects of the sector, the Akyempinhene said just like any business venture, there were risks in the agribusiness as well and asked the youth not to despair when faced with challenges but to find ways of surmounting them as it was the only way to succeed in any venture.