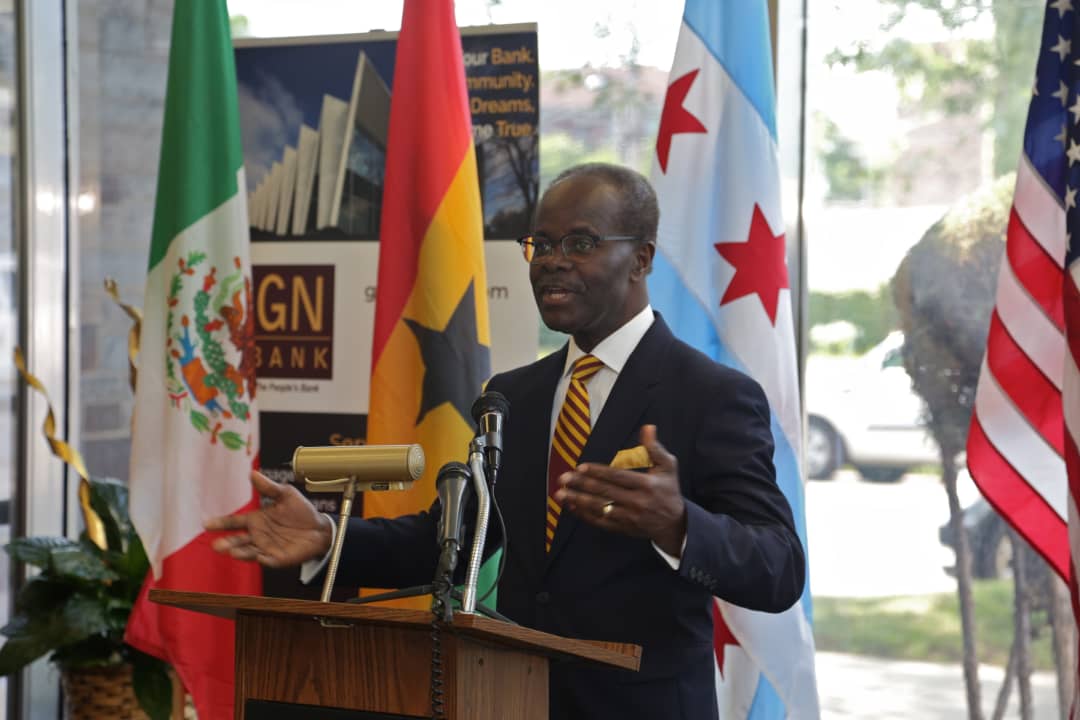 and Chairman of Groupe Nduom, Papa Kwesi Nduom outdooring the new name in an uplifting ceremony at the Bank’s Head Office on the South Side of Chicago said GN Bank, is here to stay.

“As chairman of the board, I commit to you – GN Bank is here to work with you in our community.”

This is against the situation experienced in the USA where many and smaller community banks had failed.

ISF Bank became the only African-American owned bank in the State of Illinois last year when Seaway Bank collapsed.

The Bank achieved that goal last year and continues to be profitable thanks to its loyal customers.

“Under our new brand, you will see the care and attention to customers that sustained us in this community for more than 80 years. also see the introduction of more technology, services and products to meet the growing needs of this community,” he declared.

It will be recalled that the USA banking regulator, the Office of the Controller of the Currency (OCC), earlier this year approved the changing of the name of the South Side Chicago based Illinois Service Federal Savings Bank (ISF Bank) which was started in 1934 by 13 black men to
become GN Bank.

Papa Kwesi Nduom said GN Bank is poised and prepared to be a major player in the USA market within the next five years.

“The full weight of our overall corporate business is behind us, and we are confident in what we are building on the South Side of Chicago. We offer our services and products to the broad community, but we will focus keenly on communities that have been overlooked by the major
banks – especially African-American, African, Caribbean and Latino communities,” he disclosed.

Groupe Nduom has developed a banking brand which started as a savings and loans company in Ghana and has grown to become an international bank, with more than 330 branches in Africa.

Nduom also used the opportunity to pay glowing tribute to the board of directors, management and staff of GN Bank USA.

“I wish to show appreciation to the members of our board of directors, management and staff for job they have done over the years. You have already met our CEO Robert Klamp. In a special way, let me introduce Brittany Renae; for those of you who come to the she is the one who manages our customer relationships. Our directors are James Buckner, Lisa Finch, Francis Baffour, Yvonne Nduom, Carol Wood, William Goodall and James Moore.”

He also paid tribute to some management personnel from Groupe Nduom in Ghana who in the USA for the official name change to GN Bank.

Concluding his remarks from 2 Corinthians 9:6 in the Bible, Nduom said GN Bank is here to sow bountifully and share what they reap with the community.