Is it a double for BoG? 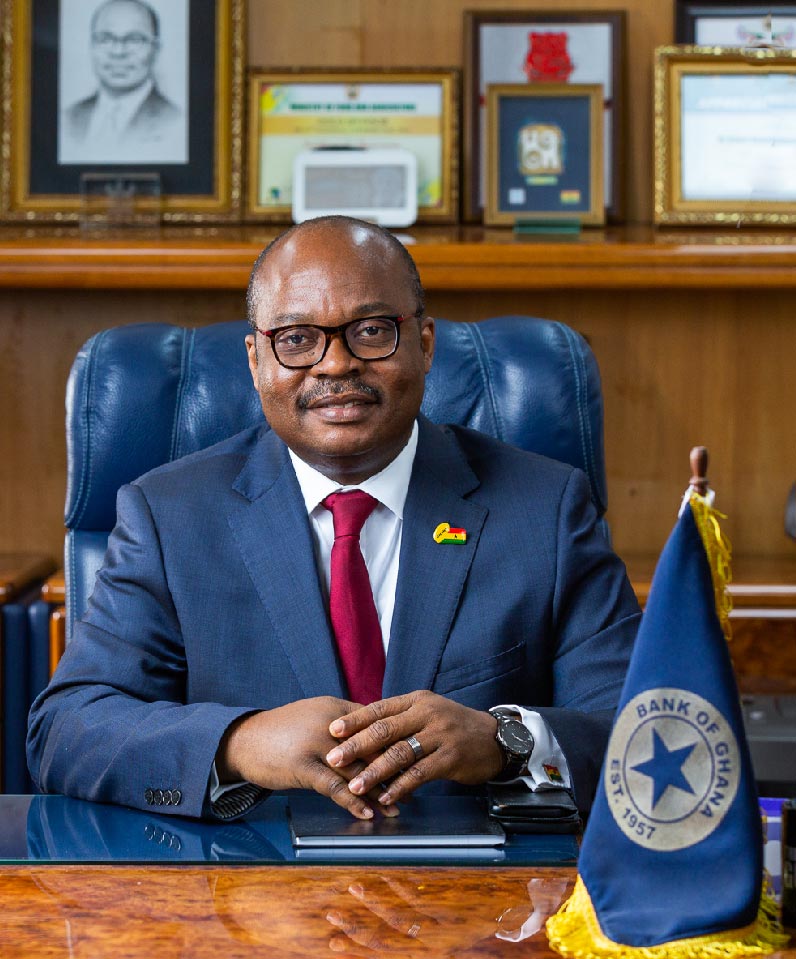 The Bank of Ghana has just been conferred with an award as the best central bank in the world for 2019. This is no mean feat. There are central banks around the world that have consistently been exemplary in their conduct, but in 2019, the BoG was adjudged better than all of them.

Instructively, this is by no means the only formal recognition that the bank has earned over the past three years.

But just as instructive is the accompanying personal recognition that The Governor of the BoG, Dr Ernest Addison, is getting too. The latest is an award announced in October this year by Global Markets, the digital newspaper which covers the World Bank/International Monetary Fund annual meetings, which has adjudged him the best central bank Governor in sub Saharan Africa.

To be sure, Dr Addison has every right to feel self-satisfied. He assumed office in 2017 with a report that detailed the looming crises that could have collapsed the banking sector. The Asset Quality Review of the financial sector was so damming and Dr Addison had to move in to salvage the situation.

From a technical point of view the BoG’s financial sector reforms, with a major recapitalisation to a minimum capital requirement of GH¢400 million for commercial banks and the revocation of licences of 11 banks for insolvency and/or financial regulatory infractions as their centrepiece, have been pivotal towards transforming the country’s financial intermediation industry.

Banking sector reforms
The success of the reforms in transforming the industry from one tottering on the brink of collapse to one that is financially and operationally equipped to support Ghana’s accelerated growth and development has been indisputably evidenced by the way in which the dramatically strengthened industry has smoothly rode the intense shocks generated by the impacts of COVID-19, including a severe run on deposits immediately prior to the three week lock down of Accra/Tema and Kumasi, Ghana’s two biggest population and commercial centres.

The recapitalisation of the various genres of financial intermediaries has not only given them the financial solidity to ensure their solvency and thus the safety of depositors funds; it has also provided them with the financial muscle to actually increase their lending to the economy, even at the height of the spread of COVID-19 and the draconian measures imposed to curb it.

While the reforms have inevitably led to a meltdown with regard to the number of financial intermediation companies in Ghana, it has ensured that those left are strong enough to ride unforeseen shocks, both institution-specific and systemic.

But just as importantly, Dr Addison has masterminded an array of crucial corporate governance directives which will ensure that the situation that forced the reforms to be implemented never arises again. The measures effectively prevent – or, at least, minimise – connected lending, weak risk management and insufficient capitalisation hidden behind creative financial reporting practices.

Over the past few years, mobile banking apps have become all the rage, even as mobile money has become the most widely used mode of payments and funds transfer in Ghana, second only to cash itself, its usefulness enhanced even further by the network interoperability established in 2018. This has not only moved Ghana rapidly towards its national goal of achieving a cash light economy; it has also made basic financial services available even in remote places where formal financial intermediation firms have failed to set up shop.

COVID19 arrival
The strategic foresight behind this was evidenced during the first half of this year when the arrival of COVID-19 created the necessity for severe restrictions on physical movement of people and economic transactions, this reached a crescendo with an outright lock down of Ghana’s two biggest and most densely populated urban centres, Accra/Tema and Kumasi, in April. Crucially, the BoG has paid close attention to issues of cyber security even establishing a cyber-security centre within its own ranks.

To further accelerate its digital agenda, the BoG has promoted the passing of key legislation that established a robust regulatory framework for electronic payments systems, licensed financial technology firms to develop digital products and services for the industry and now is introducing a sand box concept which will allow them to pilot new, innovative products and services on a pilot basis to establish their suitability for full roll out to the public.

Digital channels
Instructively, directives by the BoG to enhance the use of digital channels at the height of the COVID-19 crisis were accompanied by a host of innovative monetary stimulus measures aimed at encouraging commercial lenders to keep supporting their needy customers despite the deep uncertainties generated by the virus which made risk assessment extremely difficult on new lending under consideration.

The new measures – such as reduction in reserve and capital requirements – produced the desired effect; credit to the private sector actually increased during the first half of 2020 compared to the corresponding period of 2019 and this financing is largely responsible for the quick economic rebound Ghana is now enjoying.

Monetary Policy
Another reason for the relatively shallow and short-lived economic slump Ghana suffered as a result of the impact of COVID-19 has been the sheer efficacy of the BoG‘s monetary policy during the crisis. Actually, this is simply a continuation of the expert way in which Ghana’s central bank has managed monetary policy since 2017.

Even as government has engaged in fiscal consolidation to reign in the fiscal deficit, the BoG has eased monetary policy to support private sector financing of economic activity – the benchmark Monetary Policy Rate has been reduced from over 20 per cent as at the beginning of 2017 to 14.5 per cent currently - but in phases so well measured that inflation has also been lowered from over 15 per cent to just 10.4 per cent by September 2020.

In fact, inflation was actually down to below eight per cent - which is the median of the BoG’s target band for inflation of between six per cent and 10 per cent - until COVID-19’s inevitable impact began to be felt by the second quarter of this year.

This has in turn enabled accelerated economic growth to be sustainable, again until the global pandemic reared its ugly head.

Importantly, the BoG has also taken steps to improve policy transmission too; not only have the monetary indicators improved as a result of policy action, but they are influencing significant improvements in the actual circumstances facing operators in the economy too. For instance, the BoG’s introduction of the Ghana Reference Rate as the base lending rate for all commercial banks has significantly lowered effective lending rates charged by banks in Ghana.

Forex sales
But perhaps the most pivotal single policy initiative undertaken by the BoG under the leadership of Dr Addison has been the introduction of forward forex sales, since 2019. By establishing certainty as to the rates at which it would deliver forex at various dates into the future, the BoG has effectively taken the rug from under the feet of currency speculators who in the past have been largely responsible for the cedi’s depreciation by taking speculative trading positions against the cedi; their resultant inordinately high demand for forex thus fulfilled their prophecies of cedi depreciation enabling them to reap handsome profits.

Slow cedi slump
No longer; the exchange rates for forward delivery are established by the BoG’s regular auctions and bid prices made by banks are on the basis of the real needs of their clients and are thus determined by macroeconomic fundamentals, rather than speculation. The result has been the slowing of depreciation to its lowest level since the cedi was floated three and a half decades ago.

This has been backed up by gross foreign reserve build up to their highest levels yet. Under Dr Addison, the BoG has maintained GIRs that are consistently above US$8 billion (and sometimes approaching US$10 billion), providing enough import cover for more than four months and thus engendering unprecedentedly high confidence among forex traders with regard to availability of forex.

Combined, all these new policy initiatives and vastly improved execution of existing policies have provided a monetary policy environment that has both curbed inflation and accelerated economic growth rates, on a sustainable basis. Is this not deserving of glory?

I ask again, is this feat not worth telling and saying it loud to the hearing of all? It is certainly highly deserving of every recognition and award, I dare say.

Though executive arm of government inevitably claims most of the credit for Ghana’s improved economic performance since 2017, built on major restructuring of the way the economy actually works, the awards conferred on the BoG and its stellar governor are evidence of the fact that the country’s central bank is the pillar on which this has happened.