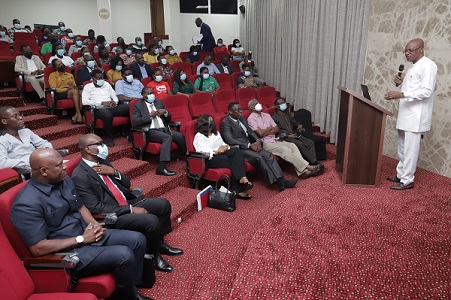 Insurance companies have been urged to rely on research to develop policies that meet the needs of customers. Such policies could motivate the public to patronise insurance packages and help usher in a regime of increased insurance coverage for the growth of the economy.

An insurance expert, Emmanuel Baba Mahama, made the call when he was speaking at a Graphic Business Insurance Fair in Accra yesterday[June 22, 2022].

The three-day fair is being organised in collaboration with the GIA to create awareness of insurance among the citizenry.

Speaking on the topic: "Making insurance the Ghanaian way of life", Mr Mahama, who is a former Chief Executive Officer of Vanguard Assurance and President of the GIA, refuted the notion that insurance was sold and not bought.

“We do not have to go chasing people and use every trick in the books to entice or force them to invest in insurance packages, but we can set ourselves up in a way that will draw people to us,” the former Board Chairman of the Graphic Communications Group Limited (GCGL), added.

According to him, insurance improved financial stability for both businesses and households, as well as public and private investment.

He said although the country had one of the highest insurance coverages in Africa, the percentage was still insignificant to ensure economic development, adding that the insurance penetration rate had to be beyond 4.4 per cent for it to have a spillover effect on the economy significantly.

Current insurance penetration in the country is three per cent, with a coverage rate of about 40 per cent.

Mr Mahama said re-orienting the public to understand and appreciate insurance as an everyday part of life called for cultural change, where the minds and beliefs of the people would be tuned towards the policy.

He advised insurers to leverage technology and digitalisation to make their services more accessible, adding that insurance language should be simplified in local languages for the average person to understand its significance.

Mr Mahama cautioned insurers against focusing their attention on making profit, saying: "I know most of you think the purpose of a business is to make profit. That is not true.”

“The purpose of true business is to create a customer and do it so well that he keeps coming over and over again. Profit is the applause you get for serving people well," he said.

The Managing Director of the GCGL, Ato Afful, stressed the need for growth in the insurance industry and said his outfit was committed to leading a national effort to create awareness of insurance across the country.

He said the month-long activities of the celebration were only the beginning, adding that the growth of the insurance sector would be beneficial to national development.

Mr Afful, therefore, urged the public to accept insurance policies in good faith and join the cause to create more awareness of insurance and its numerous benefits.

Various insurance companies and brokerage firms used the fair to showcase their products and services to the public.

The fair was on the theme: "Deepening insurance awareness to engender and enhance public confidence in Ghana".