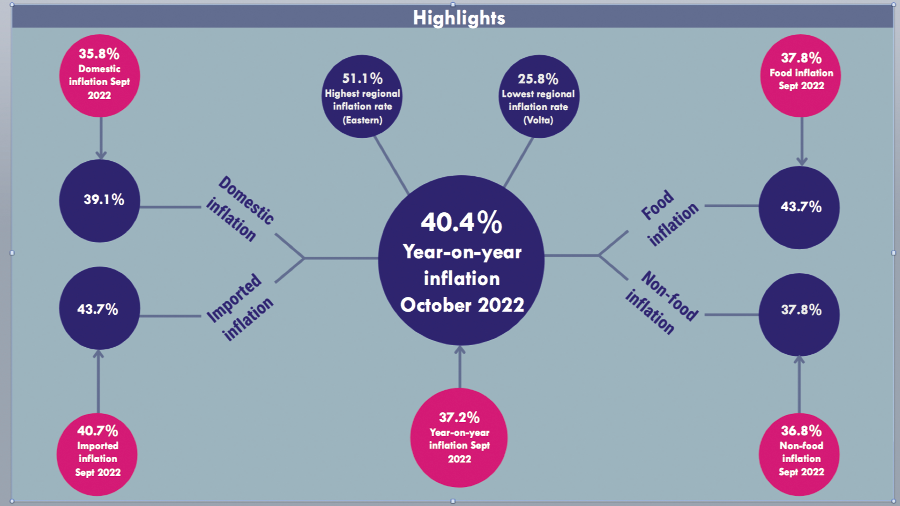 Inflation, the rate at which the prices of goods and services change in a given time, ballooned from 37.2 per cent in September to 40.4 per cent in October.

This is the 17th consecutive time the rate had increased, a development which is expected to impact the already high lending rates, among other economic indicators.

Last month’s inflation was driven by the housing, water, electricity, gas and other fuels division which recorded an inflation rate of 69.6 per cent.

This was followed by furnishings, household equipment and routine household maintenance (55.7 per cent); transport (46.3 per cent); personal care, social protection and miscellaneous goods and services (45.5 per cent).

The education division recorded the lowest inflation rate of 9.5 per cent for the month.


The Government Statistician, Professor Samuel Kobina Annim, who announced this at a news conference in Accra yesterday said: “Food inflation increased from 37.8 per cent to 43.7 per cent in the month under review, while non-food inflation also rose to 37.9 per cent.”

“Inflation for locally produced items was 39.1 per cent, while that for imported items increased to 43.7 per cent.”

The food inflation of 43.7 per cent was largely driven by water which recorded an inflation rate of 64.3 per cent.

The Eastern Region (51.1 per cent) maintained its lead as the region with the highest inflation.

The Bono East, and Ashanti regions both recorded inflation rates of 29.6 per cent.

The Consumer Price Inflation measures changes in the price of a fixed basket of goods and services purchased by households.