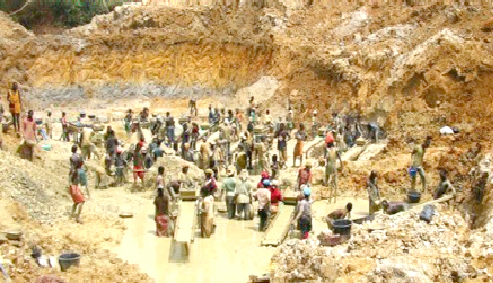 AngloGold Ashanti has confirmed a drop in the number of illegal miners operating in its concession
30.5k Shares

The Minerals Commission says it has successfully relocated about 90 per cent of the illegal miners who invaded the AngloGold Ashanti (AGA) Obuasi Mines earlier this year.

These illegal miners, according to the Chief Executive Officer of the Commission, Dr Toni Aubyn, have moved to the newly designated area which forms part of the AngloGold Ashanti concession it ceded to the government.

Giving an update on the relocation exercise started by the commission, Dr Aubyn said most of the areas that the illegal miners occupied had been cleared, with some of the areas sealed and fenced.

Dr Aubyn explained that the relocation was done after extensive consultation in a bid to ensure that the miners were evacuated from the place without any bloodshed.

“This thing shouldn’t have happened in the first place, but it is so difficult to control things that are illegal. In a situation where you have a large number of people, you don’t want to do anything that will lead to violent confrontation. Government insisted we should get them out but there should be no bloodshed in the process,” he added.

He said the Minerals Commission, together with National Security and AngloGold Ashanti were working to ensure that there was a complete evacuation of the illegal occupants.

In a bid to forestall any violent confrontation during the relocation exercise, the government opted to negotiate the exit of these unauthorised operators from the AGA mine.

A committee was subsequently constituted to oversee the relocation of the informal miners from the concession to the surrendered areas. Members of the committee during their six-week period of work met with all the relevant stakeholders to ensure that the exercise was carried out successfully.

These engagements were also to help the informal miners to formalise their operations and to work within the confines of the Minerals and Mining laws of Ghana and belong to cooperatives.

In 2016, a group of informal miners invaded the AngloGold Ashanti (AGA) Obuasi mine and have been working illegally till date on the concession of AGA amid safety concerns, and this has resulted in numerous reported accidents and casualties underground.

AngloGold, however, agreed to cede about 60 per cent of its concession to government through the Minerals Commission, which it has done and has been prepared for the informal miners to enable them to relocate and still have a place to mine.