Hundreds turn up for job fair 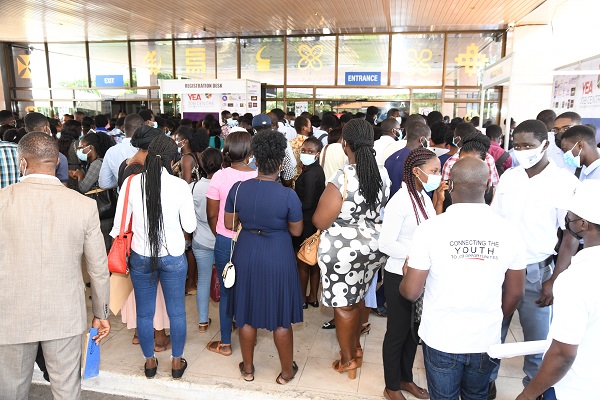 Some job seekers at the fair grounds at the AICC. Pictures: EBOW HANSON

Hundreds of job seekers thronged the Accra International Conference Centre yesterday in search of jobs during a job and career fair.

An initiative of the Youth Employment Agency (YEA), the two-day fair, dubbed: “Bridging job gap in partnership with private sector”, is expected to be a one-stop shop for employment opportunities for the youth in the national capital.

The fair, which will be rolled out subsequently in other parts of the country, forms part of efforts by the agency to facilitate jobs by connecting employers to job seekers.

As part of the fair, participants will be taken through various career talk sessions on the dos and don’ts of writing a curriculum vitae (CV), cover letters, job and labour market trends, preparing for interviews, among other pre-employment services.

It is also expected to provide an opportunity for employers to have access to qualified job seekers to fill vacant positions in their organisations.

Companies from different sectors of the economy, including banking and finance, academia, pharmaceutical, security, food, engineering, information and communications technology and waste management, have mounted booths to engage and shortlist seekers for employment.

The Deputy Minister of Employment and Labour Relations, Mr Bright Wireko-Brobbey, who launched the fair, said the initiative was part of a strategic move by the government to fulfil its promise to provide decent job opportunities for the youth.

He observed that the fair had come at a time when businesses were recovering from the economic impact of the COVID-19 pandemic as they looked forward to revamping their operations.

“It is important to ensure that employers are able to find in the seekers the right mix of skills and attitudes to support the revamping of industry. This job fair, the first of more fairs to come, is, therefore, a meeting platform envisaged to facilitate efforts by employers and job seekers to find each other,” he said.

The deputy minister urged job seekers to take advantage of the fair to interact with employers in order to gain an insight into the factors that influenced their hiring positions.

“Job seekers will further have access to employment services that will enhance their employability to ensure successful job paths to help contribute meaningfully to the growth of the economy,” he stated.

Mr Wireko-Brobbey gave an assurance of the government’s commitment to facilitate job creation for all job seekers, particularly to reduce youth unemployment through realistic programmes and collaborations with the private sector.

He commended industry players for partnering the YEA to organise the job fair and urged the agency to institute enhanced measures to organise the fair at least twice every year.

The Deputy Chief Executive Officer in charge of Finance and Administration at the YEA, Ms Lydia Atiemo, explained that the skills of job seekers who participated in the fair would be linked to the vacancies available at the various participating firms to facilitate their employment through the agency’s job centre platform.

She added that data would also be gathered to help the agency ascertain the status of unemployment in the country, which would assist the YEA to appropriately meet the needs of job seekers.

“The most important feature of the job centre is that it is a government initiative and it is the first step to bringing the private sector close,” she added.