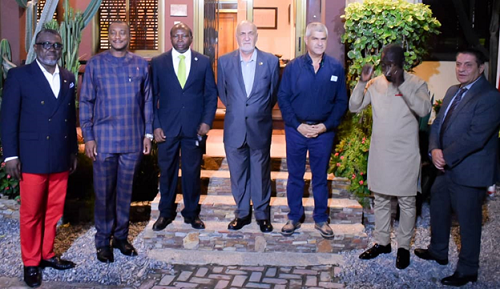 The new members in a group photograph

The General Assembly of the Honorary Consular Corps of Ghana (HCCGH), has elected new executives to steer its affairs for the next two years.

The Secretary of the Corps is Mr Kwame Acquah, Consul of Seychelles and the Treasurer is Mr Thomas Okyere, Consul of Botswana. The Executive Directors are Mr Antonio Fernandes, Consul of Portugal and Mr Fredrik Morsing, Consul of Sweden.

Mr Ray Quarcoo, Consul of Haiti and Mr Steve Mawuenyega, Consul of Serbia are in charge of government of Ghana and local authorities relationship.
Others are Mr Stefano Pezza, Consul of Italy; and Mr Carmel Mouhtiseb, Consul of Latvia who are co-chairing the Social Events and Community Projects Coordination.

Mr John Mitchell, Consul of Trinidad and Tobago was elected Chairman in charge of Membership.

The Honorary Consul of Belgium and Dean of HCCGH, Mr Dimitri Avraam said the COVID-19 pandemic has exposed the shortfall and risks in the society and environment as well as the need to prepare ourselves not-only for unexpected happening but also to be better equipped for a new approach to life, business and relief.

He said the new working groups seek to motivate it members and promote the role of honorary consuls.

“We contribute immensely to the promotion of bilateral trade and cultural promotions with Ghana and the development of the country while with our respective businesses we support employment and investments.

“We wish the elected officers well in their respective endeavours. I believe their rich experience will take the group to a notch higher before they leave office,’’ he said.

The group has an executive committee which meets every two months and reports to the General Assembly which also meets quarterly. The HCCGH is a member of the International Federation of Consular Associations (FICAC) with its headquarters in Belgium.

Meanwhile, the Honorary Consuls in Ghana constituted and established the Honorary Consular Corps of Ghana (HCCGH) in 1996 after several great efforts put up by its first leader Mr. H.R. Roth, the then Consul General of Finland with eleven members.

Since then, the Corps strength of 32 members and has worked in full compliance with the provisions of the Vienna Convention in promoting its excellent relationship with the government of Ghana.